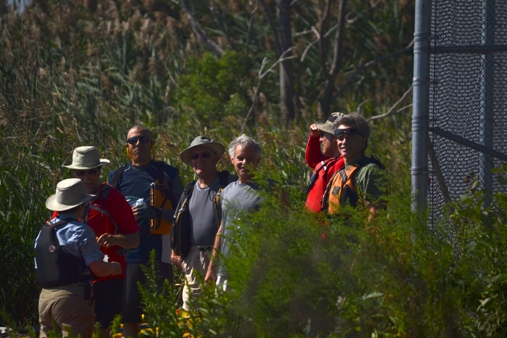 River Barge Park is a fairly new Bergen County Park located near the Sports Complex—Izod Area and MetLife Stadium and the yet-to-be mega mall Xanadu—at the end of Paterson Plank Road and then a left onto Outwater Lane. There are so many signs and ramps surrounding this area that it’s easy for anyone to be circling for hours. It happened to me and while I was not circling for hours, I did have to go out of my way a few times and ask several traffic attendants for help….and in the end, only because I was slightly familiar with the road, was I able to get to the launch.

There are a number of exhibits that depict the history of the Meadowlands and it’s worth it to take a few minutes to view it.

The peak of high tide had past and paddling upstream against the tide was a bit of a challenge although not unmanageable. We kept close to the west bank of the river where the phragmites stand tall. There was not a lot of avian activity, but we did see a great blue heron (at least I did near a bend in the river) that flew off quite quickly.

We stopped at a very small stretch of land underneath the NJ Turnpike to take a brief break. The location was partially surrounded by barbed wire fence underneath the turnpike….most likely to keep out rowdies like us. Our plan was to paddle further north and try to get to the Route 46 bridge in Little Ferry. But the group decided that we should paddle down river and meander through the Mill Creek channels….so we did. The tide was still going out and paddling was not difficult but the water level was becoming lower by the minute. One popular water trail led us back out to the main part of the river. We passed several cormorants that had taken over the tops of the pilings. Traversing the river back to the launch was easy and gentle—we were still going with the outgoing tide.

….a nice quiet morning paddle, a nice group of paddlers, and a nice way to see the mayhem of a football Sunday in the Meadowlands.