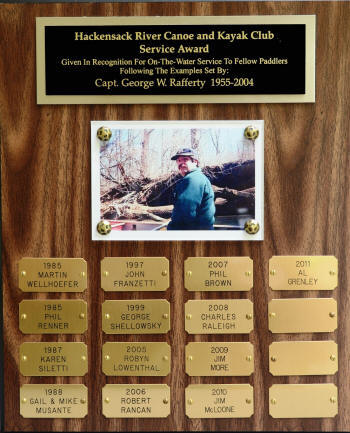 George W. Rafferty, III [1955-2004] was one of those rare people who understood the physical world but also loved all the creatures who dwell in it. When George left us, at the age of 49, his life was celebrated by his wife Toni, their daughters: Melissa and Jenna, a loving family, the Carlstadt Fire Department, the Turn Verein Hall, the Hackensack River Canoe and Kayak Club and a great many friends.

Our Club was honored to have George as a member, a teacher, a leader, and as Captain of the Club. George is remembered as the ultimate Boy Scout, by his brother, Frank, who remembered George as a truly Free Spirit who taught us all to celebrate life, to seize the day: Carpe Diem.

The award serves as a remembrance of George and to honor members of the Hackensack Canoe and Kayak Club who have followed George’s example.

The Deed of Gift reads:

This award is a gift to the Hackensack River Canoe and Kayak Club in remembrance of a great friend, teacher, and paddling companion.

This award is to be given annually to a member of the Club in recognition of outstanding on-the-water service to fellow Club members.

The award recipient shall be selected by either the Club Board of Directors, or by a committee reporting to the Board.

Club officers are not to be excluded as candidates for the award.

The award will be presented at the Annual Meeting of the Club.

This is a perpetual award; hence it shall be returned to the Club’s Captain not later than 30 days prior to the next annual meeting.

In order to recognize people who had made significant contributions to the Club and cared for its members prior to 2004, the award was made retro-active. That is, we went back to our founding to recognize people who had helped shape the character and spirit of the Club. At this writing, March 2009, it is a pleasure to read the list of recipients and remember the enjoyment of their company.