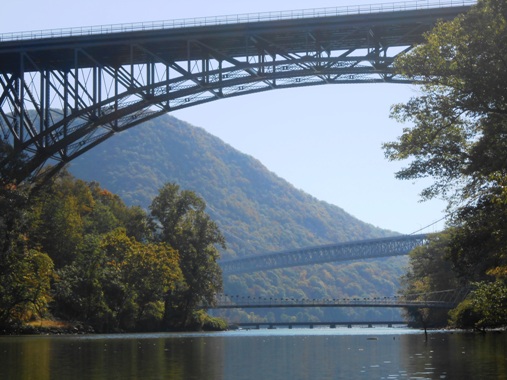 Another exquisitely beautiful day was spent on the Hudson River at Bear Mountain. Bright skies and 80 degrees—who could ask for anything more on the last Sunday in September.

Eleven paddlers (Cory W., Tom B., Skip H., Manfred, Jeri and Bob C., Wayne, John B.,
Sumonnat K., Ed R., and myself) enjoyed the—well—mostly quite waters and tides that really cooperated with our launch and paddling times. We introduced ourselves and briefly talked about the day’s outing.

I had been to this site just once before. It’s really easy to get to after a few left-hand turns, starting at Richie’s Little Place (a restaurant) and a traffic light on 9W north. When I got to the launch, I noticed a number of cars including a police vehicle in the parking lot. Someone approached me and advised that we could not unload our boats on the other side of the railroad tracks separating the very large launch area and the visitors’ parking lot. Well, not to be the shy one, I approached the police vehicle and had a “nice” chat with the officer. After some banter back and forth, he agreed to let us offload our boats by the water. You just have to know how to smile.

Once we were all in the water, we paddled down river to Popolopen Creek, passing under three bridges, the railroad bridge being the lowest and closest to the water. We had to be careful due to pilings just inches below our boats (due to low tide conditions).

Did I mention the fall foliage just beginning to flourish on trees—I guess that’s as it should be just days into the fall season.

We continued to paddle down river with several Sea Streak catamarans and Circle Line boats passing us in the middle of the river. We passed a gigantic deer sculpture with massive antlers on the side of a hill just before we got to Doodletown Bight and Iona Island. “Do Not Enter” signs clearly marked the entry to the marshland beyond the railroad bridge. By the way….we could not believe how many trains whizzed by on either side of the Hudson…passenger trains and freight trains seemed to go by every few minutes.

Once past Iona Island we decided to cross the river. River traffic was really busy…everyone trying to make the most of a gorgeous day! We massed together and paddled like heck. There was no easy way….boats speeding by going north and south. John B. kept saying, “Don’t stop! Keep paddling!!!” We all made it safely across.

There is a long stretch of land specifically designed for trains that separates the river from the Annsville Creek body of water. We paddled over to the public dock where Atlantic Kayak outfitters has a boat house. The “dock” is a series of connected hard rubber flotation sections with grooves to accept fat-moving, hard-driving paddlers to land. Not as easy as it sounds...requires a good hand by someone already having landed to help those in need.

We had a nice relaxing lunch with some of us resting in the natural gazebo. A few paddlers walked over to the gas station/hospitality center (Dunkin’ Donuts) across the highway, only a few minutes’ walk.

On our way again, we hugged the east side of the river. The water was a bit more turbulent due to increased river traffic. At one point we had some rogue waves that caught us somewhat off guard. As we all said later, “Wow, those were the biggest waves we ever paddled through”. And they were! Of course all I wanted to do was to take some pictures of my fellow paddlers in the “curl”. That never happened. I was too busy paddling!

We saw a lot of hawks but no eagles and guys fishing with their multiple rods baited and waiting to lure their prey.

All back safe and sound, we sat around the picnic table and had Manfred’s rum cake and refreshments. What a way to top off the day! As always, “Thanks for the goodies, Manfred and Marianne.” 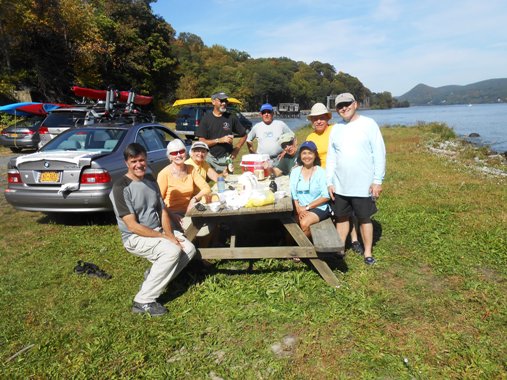