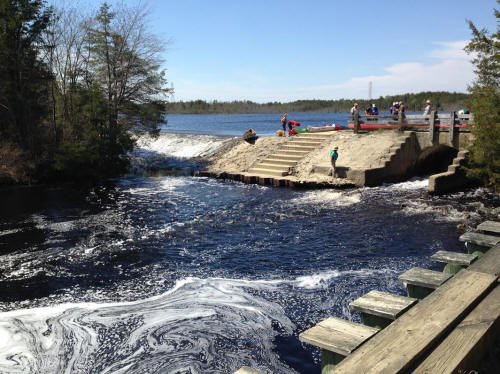 Cedar Creek
The Son Of Stumpula Strikes Once More
by Martin W.

On a spring day in mid-April, eight intrepid members of the HRCKC set out on an adventurous journey into the wilds of the lands known as the Joisey Pine Barrens. Yes, the lands of cedars, shrug pines, tea-colored water, beaver and of course, the infamous Jersey Devil!

Those hardy folks who braved this perilous undertaking into the unknown were the following... Alan R., Jan R., Barbara R., Darth D., Teri R., Hannah-Lori B., John S. and myself.

As prepared as we were for potential hazards of blizzards (and after this winter anything must be expected), massive floods from glacial out-wash, hordes of commie mosquitoes just waiting to sap and impurify all of our precious bodily fluids (Gen. Jack D. Ripper), plague, bands of crazed Mingos in bad moods, zombies, pestilence and worst of all, possibly a sighting of Kim Kardashian … we never expected what was actually bestowed upon us – nice weather!

Yes, folks – nice weather… Bright sunny skies, pleasant temperatures, some non-biting bugs, but somewhat low but passable water levels. After driving to the put-in at Dover Forge, unloading the boats and gear, doing the shuttle to the take-out at Dudley Park we finally shoved off to start our journey downstream

Due to the low water, which forced us to resort to using the so-called “Bedroom Stroke” or “Shake-N-Bake” technique at various times to conquer some of the many obstructions we came upon in our endeavor to navigate the first three or so miles of the river. Yes, there was some pulling, lifting, grunting and possibly more than a few utterances of some colorful words not fit for the ears of the faint of heart… but we persevered. I did my usual African Queen routine in the “Swamp” … alas, the mud was quite “fragrant” but the water was refreshing.

Continuing downstream we finally came upon and crossed Ore Pond to get to the dam, where we then stopped and ate lunch. After a while we portaged the boats over the dam and continued our journey. A few miles and more than a few more obstructions later, we came upon the former “Stumpula” which as a side note, both Chris D. and Capt. Richard H. (whom the HRCKC ladies are still talking about) were quite intimate with on past trips. “Stumpula” was a very tricky spot where the current would - if one wasn’t dead on right with precise boat control - force most paddlers into either a nasty log jam or a partially submerged “stump” just in front of very sticker-laden piece of shrubbery and a man eating Holly. Hence “Stumpula” named after “Dracula” - both drawing blood. Anyway, for the last couple years storms had washed most of Stumpula” away leaving a much easier passage through…. until this year! The “Son Of Stumpula” is back and nastier than the old man was. No way of getting through it without getting out and pulling or having someone pull (at least at that water level).

Passing the dense cedar forest, which was hit by a “micro-burst” many years ago (looks somewhat like a mini version of the asteroid/comet strike at Tunguska in Siberia), we negotiated the old railroad trestle and after a few more obstructions - necessitating some vigorous saw work - we came to the end of the journey at Dudley Park. After loading the boats and gear some of us headed over to our usual post paddle eating establishment – The Shady Rest - for vittles and drink. Great trip, great people and thank you - Son Of Stumpula for the blood letting! I don't know about the others, but I sure had a great time...
Then the two hour car ride back home! Lucky I had two wonderful travel companions along for the ride.

Many thanks to Hannah-Lori B. for the following photographs... 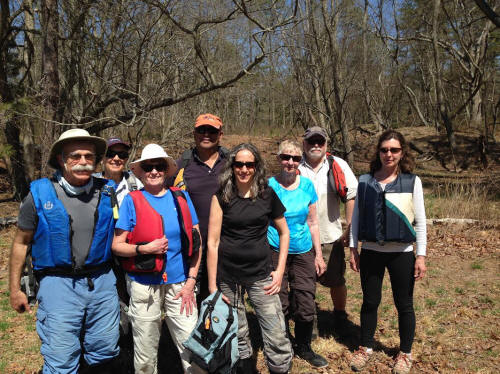