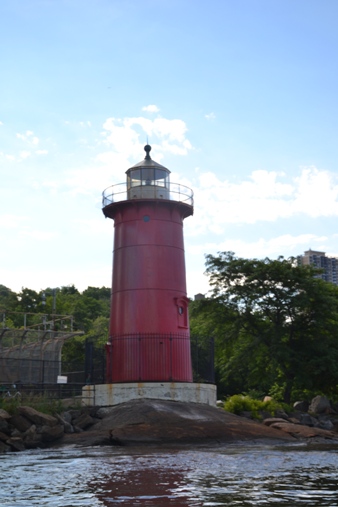 I’m not easily impressed, but being underneath the gray superstructure of the George Washington Bridge makes one feel pretty small. I knew all our paddlers who had never launched from there would feel the same way. Paddlers included: me, Manfred J. Hatice G., Mica and Michael G, Janet L., Andy A., Skip H., and Joan B.

What our group had not bargained for was the dozens of vehicles towing jet skis! Manfred called me enroute to let me know about the parking situation. There were only three slots remaining… and we managed to double-park our vehicles to fit everyone. The other group was friendly, but their loud music at 8:30 in the morning was a bit too much for some of us. If I could only dance the salsa! It turned out that they were all part of a club and about 300 jet skiers who were meeting in Jersey City later that morning.

We had a short pre-launch talk stressing “that this is a group and we need to stay together.” We finally launched and paddled downriver on the Jersey side so that when we crossed we would wind up near the Little Red Lighthouse, going with the current. By the time we crossed we had overshot the lighthouse. I could tell the current was difficult. Skip writes, “I took notice of some of our group 300 feet off shore, really struggling trying to paddle down stream against the strong current.” As each one of us was able to “get free”, we were able to take refuge in a calm little section and wait for everyone to rest up before we continued on.

Making our way downriver against the current but very near the shoreline, we passed walkers, bikers, joggers on the paved path that runs alongside the river, and some young fellows fishing from shore. We passed the public utilities transfer station with a park on the roof. When we got to a former naval ship moored in the river (now a restaurant), we made that our point of crossing the Hudson back to New Jersey.

Side by side we crossed this wide body of water… for safety and visibility. We wound up next to Edgewater where some of the homes were truly eye-catching with big picture windows……. and anyone looking would have quite a view.

When we got back to the launch all the jet skiers were gone, except for their vehicles, of course.

We enjoyed the camaraderie of each other and Manfred and Marianne’s delicious goodies. 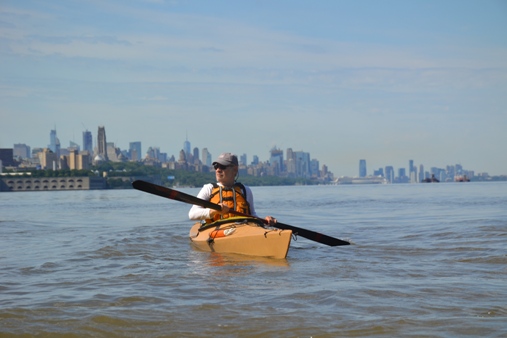