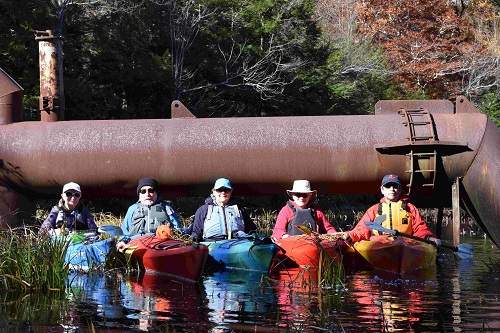 Eleven members with eleven kayaks came out on a beautiful Saturday afternoon to paddle scenic Wawayanda Lake. There were quite a few other kayakers and anglers using the launch area, but once out on the water all was peaceful.

We were a bit too early in the month for the fall colors, although there were some spectacular individual trees. At the far end of the lake some us paddled over the shallows to the rusty pipe that emerges from the lake and disappears into the woods, and as usual we tried to guess what it had been used for.

After the paddle, Bob Cohn did some research and found the answer at https://www.facebook.com/127516164094586/posts/what-appears-to-be-a-culvert-is-actually-part-of-a-little-known-pipeline-cherry-/1138657072980485/ I've included some of the information from that facebook post below. Also, as I didn't see anyone with a camera out on this trip, I've attached a photo Betty Wiest took in Nov 2018 of club members by the pipe.

After our pipe encounter, we continued round the edge of the lake, passing an eagle's nest (no eagles in sight), found a few of the water lilies actually in flower, and several cormorants perched on convenient rocks. We passed other kayakers who had pulled their boats up on shore and were enjoying the view from convenient sun-warmed rocks, but resisted the temptation to do the same ourselves. Then, we paddled the bay near the put in down to the stone topped retaining wall before returning to reload and make our way home.

The following is an edited extract of a post (link above) on the "Sussex County Excursions" page on Facebook. The original post includes a map of the pipeline route and a number of pictures taken along the route, some of which is now a "Pipeline Trail".

Wawayanda State Park was one of the first Green Acres acquisitions in New Jersey in 1963. In 1965 a severe water emergency occurred in Newark, New Jersey. The summer of 1965 was the beginning of the fifth year of a crippling drought that had plagued New Jersey. Newark's water supply was at its lowest point in history at only 28% of capacity. The mayor of Newark asked the state Department of conservation for help. Newark was allowed to tap 500,000,000 gallons of water from Wawayanda Lake due to the fact that it's citizens' well-being was at risk. The Newark City Council immediately appropriated $152,000 to establish a 20 inch pipeline and pumping station at Wawayanda Lake. Once completed, the pipeline extends out from the lake and runs 4000 feet over Cherry Ridge. The water then flowed by gravity down Cherry Ridge Brook and into Canistear reservoir. Canistear Reservoir belongs to Newark and is 3 1/2 miles from Wawayanda Lake. The transfusion of water from the lake during the critical months of August, September and October spared the city of Newark a water shortage disaster. By the end of the summer of 1966 the drought was over and the pumping of water permanently ceased.