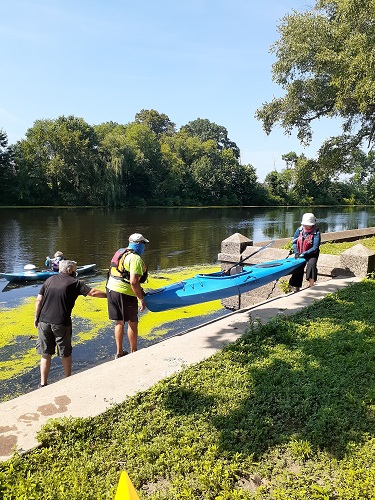 Boy, was it hot! I should have scheduled this "lazy Sunday" paddle for 8 a.m.

We nine paddlers (Sumonnat, Al, Betty Ulla, Karen, Amy, Joe, Mike and Yvonne) met at West Side Park, Totowa section of Paterson right next to John F. Kennedy High School. The park has seen much better days.....probably back in the early 1900's. The bones of the park rival something out of an Olmsted landscape design book. Picture ladies in fine dresses with fancy parasols stepping down concrete steps and getting into beautiful boats on the calm waters of the river. But now it has fallen on hard times with signs of deterioration everywhere--weeds, potholes, more weeds, more potholes, more unsightly views.

A little history: Back in May of 2017 an event was held at this park introducing a master plan for the park under then Mayor Jose Torres. Plans for 17 projects were identified with a price tag of over $20 million. I really don't know what the City of Paterson is waiting for! The people of Totowa, Paterson and surrounding area deserve better.

One plus was that we could park right next to the steps we would be launching from. Al and Joe were fantastic in helping everyone launch our boats and helping us too on the return. Thank you guys!!!

We were greeted with the sight of a great blue heron sitting posing for us directly across from where we put-in. And not far from the heron sitting majestically was a beautiful egret.

We made our way north towards the Falls; the current was gentle. There is a concrete dam which acts as a buffer between the river and the Falls with about a 300-foot rocky area in between. Shortly before the dam a group of pedestrians kept shouting alerting us to the danger. (One time I paddled here years ago, the dam was visible and the water level lower; you could paddle right up to the dam with no worries about going past it.) We turned around and paddled upriver, past our put-in and followed the river to a point at an island just short of Route 80. We encountered a bit of a bubbly, rocky part of the stream that made it too difficult to get beyond. It became our turning point. The temperature was increasing. It was a good time to head back.

The pavilion provided a great place to social distance while having a bite to eat after we returned. It was a good way to end the paddle.