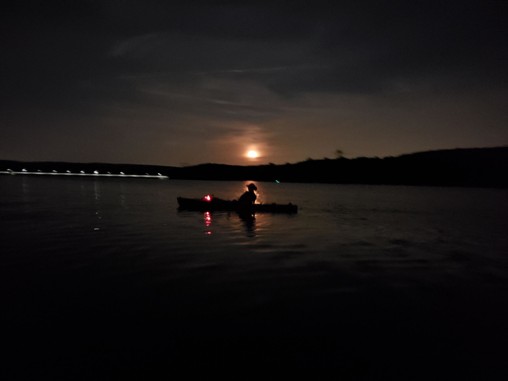 Betty planned a great evening paddle on the Monksville Reservoir but unfortunately she was unable to lead the trip. Alan Rabinowitz and I were really looking forward to seeing everyone and enjoying a nice moonlight paddle so we volunteered to be trip leaders. I guess other paddlers felt the same way because we had a great turnout. We had 19 paddlers; AlanR ,Barbara, George, Dave and Claire, Linda ,Phil, Robyn, Barry, Lori, Jason, Peter, Naomi, Geri and Bob, Ken, Charlie and his daughter Valerie came as a guest. Also another guest Peter A.

Everyone wore masks at the put-in and when we got back to the takeout. There were 2 tandem canoes, 2 solo canoes and everyone else was in a solo kayak. With lots of help from everyone we all got on the water by 7:15. Once we were on the water we could socially distance so we could take them off.

Peter knew the reservoir much better than we did since we had only paddled it once before and he was gracious enough to lead the way. From the south boat launch we paddled through the submerged trees and around the island towards the north end of the reservoir. It was such an incredible night. There was no wind and the temperature was perfect. The humidity of the day was gone. We saw a loon and 2 huge swans and not too many other paddlers. It was easy to tell who was in our group, we were the ones wearing life preservers!

The sun went down around 8:35 so we turned around and paddled back to a point opposite the dam so we would be in a good spot to see the moon rise. I thought the moon would appear as soon as the sun set. Not true, so Naomi and Phil looked up the time for moonrise near us and it was 9:32. There were a few people who didn’t want to wait so they paddled back together and the rest of us waited. It was definitely worth it.

Robyn spotted a faint glow in the southwest near the high tension tower. We watched as it brightened and we realized it was the glow of the moon which appeared so slowly over the trees. Once it appeared it seemed to rise quickly. A huge yellow moon with its reflection on the water. We all sat in our boats and enjoyed the perfect moonrise. Most of us decided we’ve never really watched a moon rise before.

A short paddle back in the moonlight and we were at the cars. This really was a trip by committee. Betty did all the legwork, Peter, Naomi and Robyn all helped so thank you to all for a great night on the water. Naomi and Linda have sent photos (thank you) they took but I have no idea how to upload them yet so hopefully photos will follow. Alan and I thank everyone for their help and for joining us. 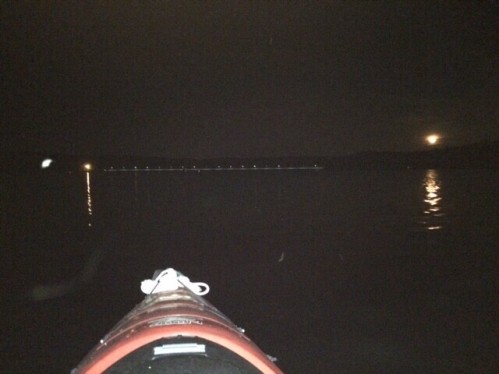 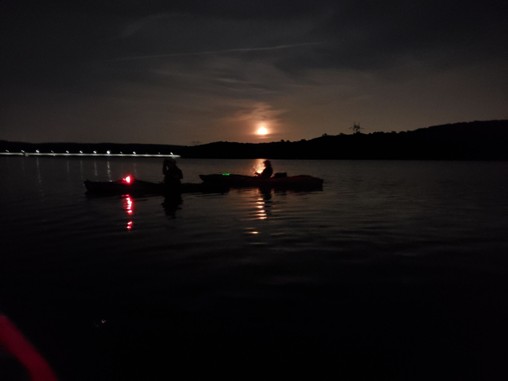 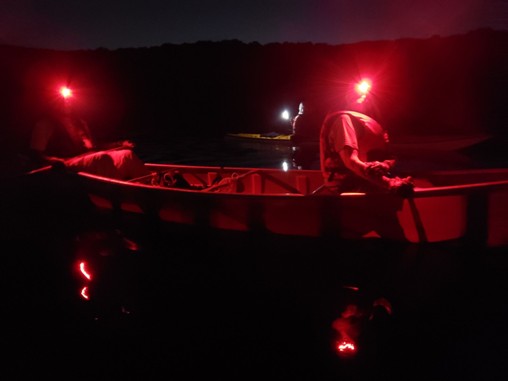 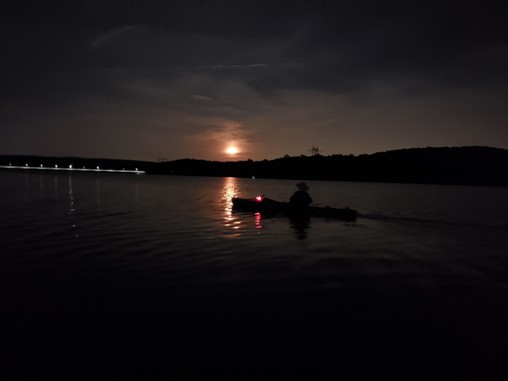 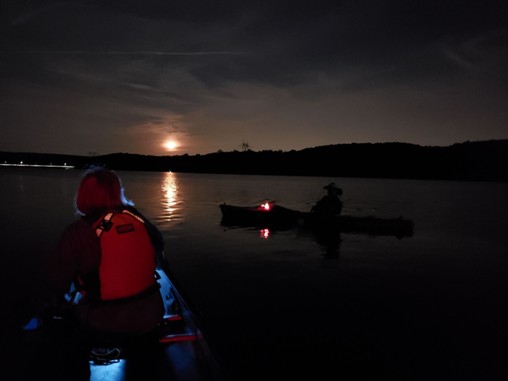