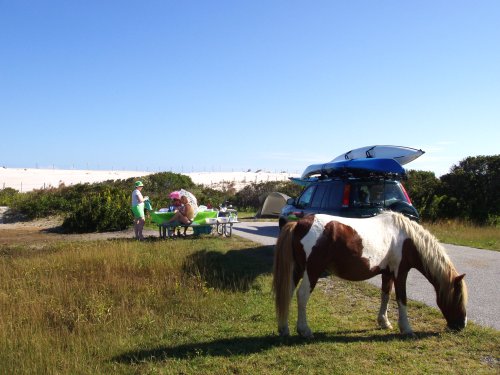 Assateague Island National Seashore is a barrier island located eight miles south of Ocean City, Maryland, just south of the Delaware border. One of the most unique aspects of this treasured seashore area is the number of wild ponies that inhabit the land. It is also home to millions of mosquitoes!

Over the weekend of September 26-28, paddlers from the HRCKC and members of their families converged on the island to take advantage of the waters of Sinepuxent Bay that separate the National Seashore and the mainland.

I started packing for this trip early in the week. A bit here….a bit there since I don’t work off a list. There is always something that you forget, but after years of camping with the family, I figured I had a pretty good handle on the system. I had to make sure the car was pretty well packed (except for the kayak and cooler) on Thursday since I had school that night. I finished loading the car on Friday morning and went to a business commitment with everything on or in the van.

The ride down was fairly uneventful listening to books on tape most of the way. Things were fine until I got to Route 50 eastbound. Just take if from me, the Maryland State Troopers make a lot of money from speeding travelers of this road. No, I didn’t get a ticket, but the trooper gave me a warning. Sweet smiles.

Arriving at the dual entrance for the State Park and the National Seashore areas, to my amazement, wild ponies were grazing just a few yards off to one side of the road. On the other side egrets were looking for dinner in the marshland.

Making my way to the campground around six o’clock that evening, I was greeted by many of our fellow members already having set up their sites—#34—that’s the number I was looking for. I shared this site with Ruth, Carol and Lamece. They had pitched their tent and the picnic table was full of goodies.

I decided to pitch my tent on a small patch of slightly elevated ground. Little did I realize what a really smart decision this was until later on—when the rains came! A lite dinner of chicken salad and fruit was just enough.

Between the campground and the Atlantic Ocean is a tall dune—tall enough so that at the crest you can see the ocean on one side and the bay on the other. The island’s forests waited to be explored. A short walk on the beach and we were ready for conversation and campfire. Bring on the s’mores!

Lee McQuade and his son, Brian, held court to the rest of us HRCKC campers. With our camp chairs we gathered around the campfire—actually it was the grill loaded and reloaded with firewood. A canopy covered a table with their camp stove. We talked and played name games to pass the time. Think about it—how many names of places start with the letter “A,” the letter “Y,” the letter …..

Time for bed. A good night’s sleep and a great breakfast of eggs, cinnamon toast, juice, coffee, fruit and cereal (is this a restaurant?) got us up and running.

I managed a quick bike ride, touring the rest of our campground, seeing wild (?) ponies by the side of the road. Feeding the ponies is forbidden.

It was time to paddle. We all made our way over to the Old Ferry Landing for launching our boats. Time for sun screen and bug repellent. Eighteen kayaks and one canoe (where did he come from?) made up our flotilla. It was a beautiful, beautiful day.

With Lee and Anita leading the group, we first paddled up to Dead Horse Point. Well, that probably was not really the name of the site, but yes, there actually was a dead horse. It was starting to smell.

We stopped at a small cove. People began to swim in the shallow water during our break, others were content to snack a bit. Back in the boats, we made our way up to Tingles, a remote campground accessible only by boat. Greg, the trailblazer of the group, discovered to his dismay, that lunching at this site was not a good idea. Mosquitoes had already made lunch of him. We dined in the confines of our cockpits.

We paddled back with the wind on our backs….the luck of the Irish being with us…and the sign of a good trip—no one tipping over. The temperature was delicious and the wind was minimal, although we saw several parachute windsurfers in the distance testing their skill in the bay.

With a few hours of the afternoon still available, a few of us sat on the beach enthralled in the art of watching kite flying. How is it that the mermaid and the petite box kept flying, but the bird kept taking nosedives?

Dinner. While several enjoyed fine dining at their tent sites, a dozen of us decided to visit the local Assateague Crab House Restaurant. Kathy, Carol, Ken and a few others picked at Maryland crabs—the highlight of the dinner. We were the last group to leave the restaurant. Back to the campground and some more convivial conversation.

Time for bed. It started to rain. Before the night was over, like around 2:30 a.m., the rain started to drip in Ruth’s tent. The gals decided it would be better to spend the rest of the night sleeping in their cars. I stuck it out in my tent but hardly slept. I could feel the foot of my sleeping bag getting damp, but I decided to stay put.

Six a.m. Venturing out of my tent with the dawn of the day I was surprised to see our picnic table sitting in inches of water. Then I looked by my tent, a foot away was water inching its way toward my tent. Walking around in the near vicinity, I was struck by how many other sites were affected by the rain. Lee’s tent was sitting in water, as was his son’s. His picnic table was also sitting in inches of water. What a sight!

I think the storm dampened most of our spirits for kayaking on Sunday. It was enough to sort through the wet stuff and repack our cars. Breakfast was a quick piece of coffee cake. Coffee compliments of Lee. Most of us wandered around assessing the various campsites. Slowly we started to “dry out.”

By ten o’clock in the morning most of us were fairly ready to get on the road for the journey back home. A few last minute pictures and I was on the road.

We all agreed – despite the rain, it was a great trip. We’ll be up for it same time next year! 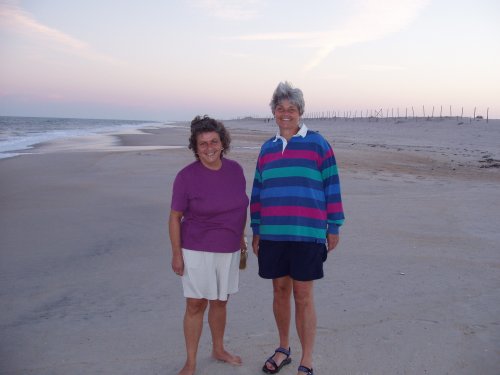 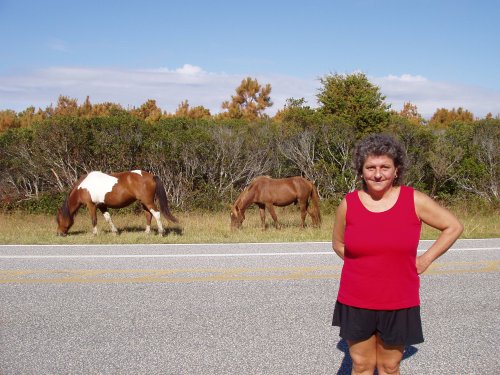 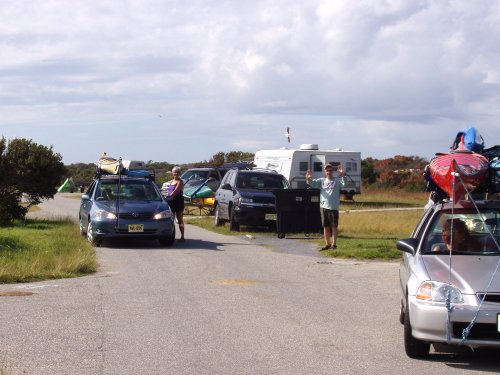 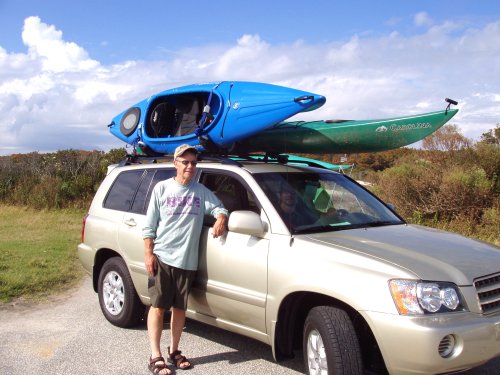 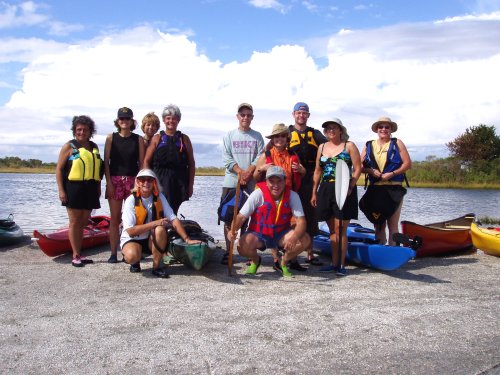 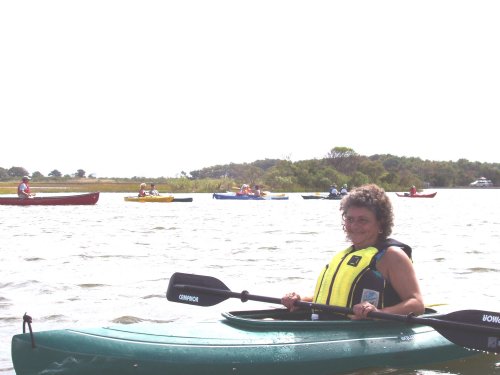 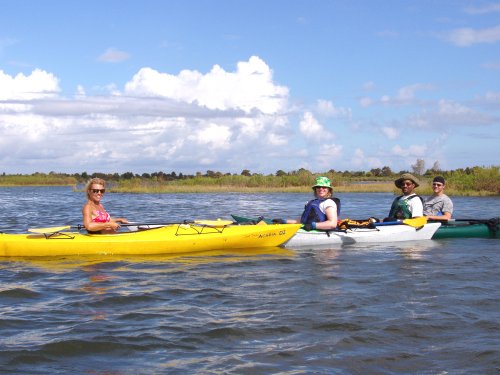 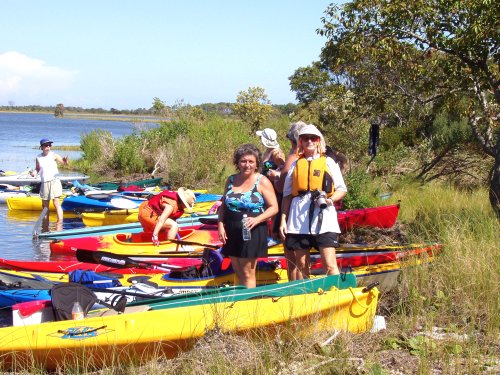 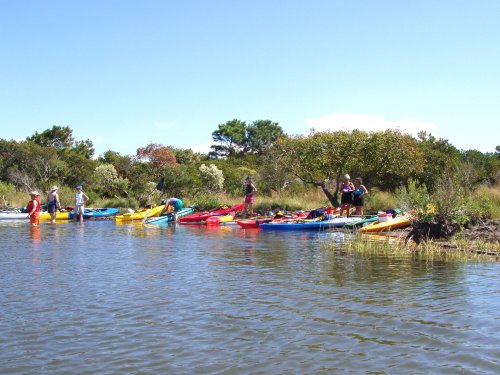 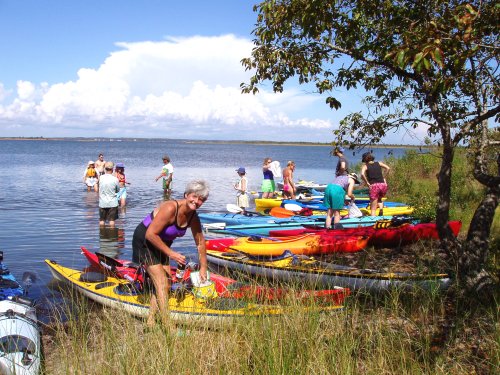