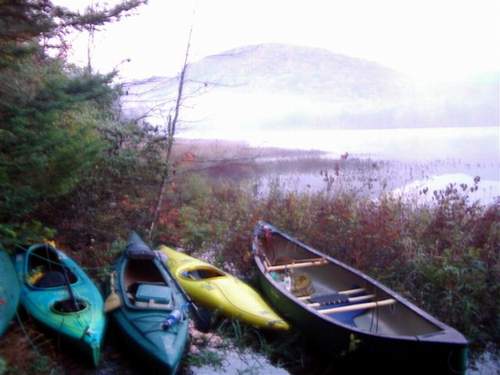 Good Luck Lake...a name full of promise and assurance, an excellent place to witness the spectacular Adirondack foliage in its full fall splendor. Or, as I reminded myself, an ironic name for a place where malevolent weather and circumstance could turn any forgotten item, piece of equipment in ill repair, or rusty or unhoned skill into an event that could humble and humiliate me, and make it a lot harder to enjoy the scenery. I would have to depend on my most powerful amulets, charms and talismans, chief among them: my PFD.

Our group arrived at the put in within a short span of time despite having traveled various routes and not in one great convoy, due in no small part to the excellent directions which were provided. The weather was warm and sunny, the air full of the fragrance of balsam fir. In relatively short order we were all on the water, our boats packed with our camping gear.

We soon began to warm up our paddling muscles against the gentle current of the west branch of the Sacandaga River. The bridge at the put in was quickly lost to view, and it was easy to forget the hustle and bustle of civilization. Here the impacts and edifices of man were not evident. Here one could commune with the outdoors, Nature, the Eternal Spirit.

My reverie was soon interrupted as we encountered the impacts and edifices of another of our planet's inhabitants, the Beavers. A dam perhaps as high as 18" spanned the river, it's presenting face a welter of sticks and branches, smooth and slick with the cascading water, many of the ends appearing threateningly sharpened by large rodent incisors. The banks were high and steep on the right, and there was thick tangled brush everywhere. The water was cool enough to be less than inviting for a dip. However, after a brief period of discussion and analysis of the situation, our group began to work its way across the dam aided by the stoic bravery of certain members of the group who had no problem standing amid precarious footings in water up to their crotch as they helped the others across.
Once again all afloat, we entered the outlet of Good Luck Lake. Now even narrower with woody branches overhanging the banks, and serpentine in nature, the stream wound on. It was not long before we came to another beaver dam, this one smaller, holding back 6” of water at most. Emboldened by our recent encounter with the larger dam, and working now as a unit in a more cohesive and organized fashion, we were all quickly up and over and afloat again. The woody brush on the banks now began to give way to marsh grasses and other swamp flora, and our vista opened to the mountainsides that bracketed Good Luck Lake, cloaked as they were in their autumn finery.

After a brief reconnoiter, we were led, almost unerringly, to the best campsite on the lake where we proceeded to set up our camp. The lake reflected the brilliant patchwork of colors on the opposite shoreline and invited a leisurely paddle. That night after dinner, those that paddled out on the still waters would be treated to a spectacular view of the Milky Way. As if relaxing in one’s boat looking up at the stars in this beautiful gem of a lake in the Adirondacks wasn’t enough, the heavens rewarded us with a couple of golden streaking meteors.

The next morning brought bright sunshine on the mountainsides opposite our camp, enhancing the vivid colors of the leaves. The weather was again mild and inviting. Additional members of our party were at the put in, having arrived after nightfall. They soon transported themselves to the campsite and joined the happy throng.

The day was spent in various pursuits which included but were not limited to exploring the lake, hiking to Spectacle Lake, or venturing out to the river to see the sights and enjoy the experience of taking an unladen boat over the beaver dams. It was another beautiful day at Good Luck Lake, unmarred by any unpleasant experience…save one.

One of our party began to complain of discomfort in her foot. Our concerns were heightened when she began to show signs of being unable to walk easily. In the end she reluctantly admitted she had twisted her ankle during the transit of one of the beaver dams. Hmmm. The wind was picking up, too, and there were a few spritzes of rain. Could it be that our run of good luck at Good Luck had run out?

What happened next is the subject of some debate, with wildly differing accounts. The variability of these accounts is made all the more remarkable because nobody had consumed alcohol to a significant degree. There is general agreement that the injured member of the party was transported back to her tent at the end of the evening seated regally in a camp chair borne by several muscular young men. However, no one will admit to being the one who was in charge of the ostrich feather fan which gently circulated the air above the head of the injured party. The song (or “noise” as some have called it) which the bearers sang (or grunted) as they carried their charge is also the source of some contention. Some say that it was similar to the chant of the soldiers of the Wicked Witch of the West in the “Wizard of Oz”, while others say it was more akin to the song “I’ve been working on the Railroad”.

The fiercest disagreement, however, arises when the subject of what was being vocalized by the person who was being carried is broached. It seems there are two versions as to what cries echoed that night over the waters of Good Luck Lake. Was it “Faster, you Peasants! Faster!” or was it “Put me down! Please! I’ll walk!” Perhaps we shall never know the truth.

The following morning there were hints of sunshine and some showers, and temperatures were in the high 40’s. It being Sunday, some of our party had to leave, and after breakfast they broke camp. We all accompanied them to the put in. We arrived just as two more late-comers got there. There was still time for a day trip after the camping gear had been off-loaded. There was no 100 oar galley available, and our leader volunteered to chauffer our injured comrade in his canoe.

Moving easily downstream on the river we soon found the outlet of Chubb Lake. Another beaver dam delayed us only momentarily as our now-experienced group easily negotiated it. We were then in a small winding stream that passed through a marsh before finally opening up into Chubb Lake. A light shower passed over, and the wind picked up a little. It was cloudy now, and some might have called it a raw day, but the warm colors on the trees girdling the lake made it seem not bad at all.

Chubb Lake has many areas of bog-like habitat, and some of our party noticed pitcher plants. Some put ashore on a rocky tree crowned peninsula to stretch their legs before we decided to leave the lake and head downstream. Back through the maze like thread of a stream, over the beaver dam (easily) and downstream only a short distance to the longest and biggest beaver dam we had encountered yet. By now, and with boats empty of camping gear, it was great fun to shoot over the dam under the watchful eye of our sure-footed leader, whose father must surely have been a polar bear, judging by his complete indifference to exposure to cold water.

Downstream we went, in the realm of the beaver and muskrat, enjoying the wilderness feeling. In mid-afternoon we consulted our maps and decided to head back upstream. Some of our party would be heading home in Sunday traffic, while some of us would get to spend one more night in the woods.

The next day was spent breaking camp and preparing to paddle out. The weather had cleared, and the surrounding mountains could be seen clearly. If the foliage had not been at peak color when we arrived, it certainly was now. I was a little sorry that the trip was ending so soon, I would have liked to stay a week or so. At the put in, now the take out, I loaded my gear into the truck and the boat on the rack. The sun was out. I had slept, eaten and paddled well. I had forgotten nothing that I really needed. All my gear held up and performed, and in my mind at least, I had acquitted myself well, and had not taken an unintentional swim. I guess I’ll try my Good Luck Lake again. 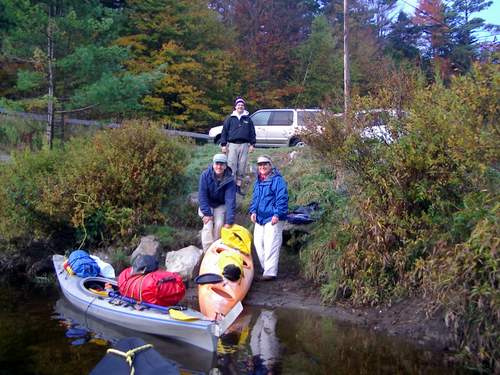 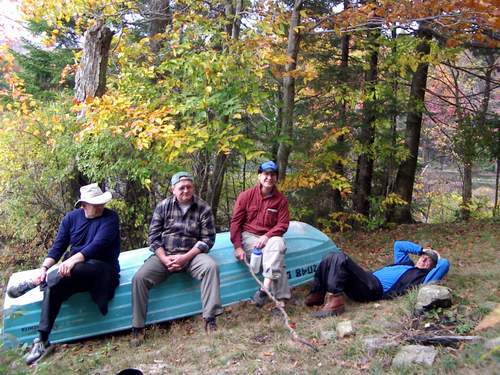 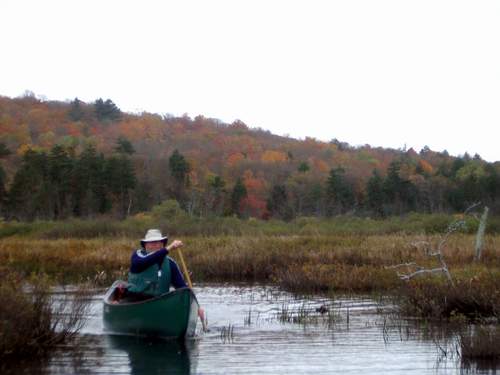 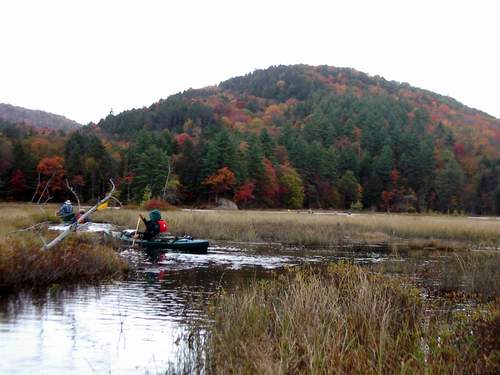 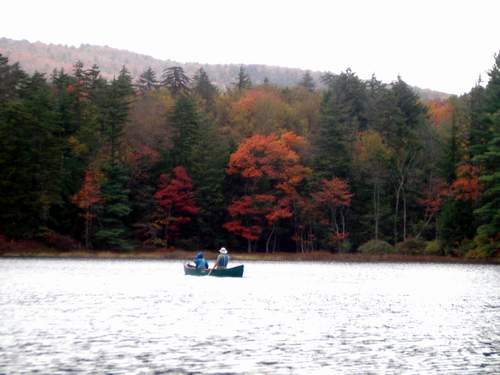 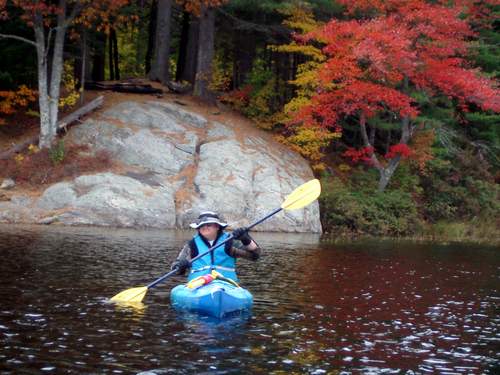 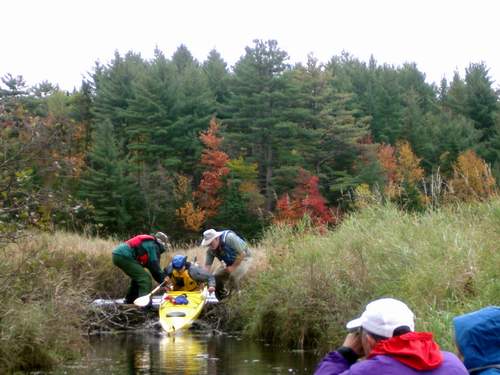 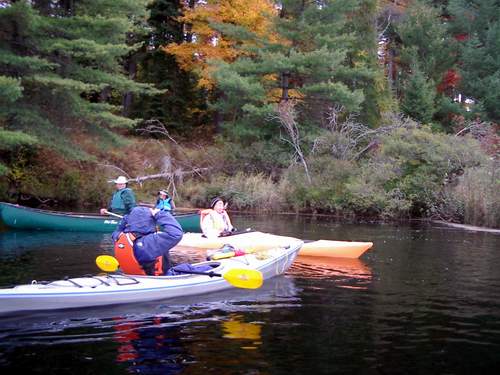 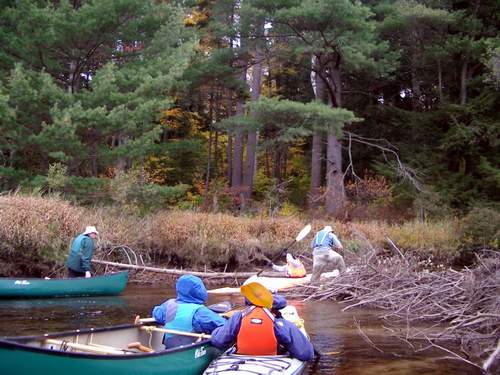 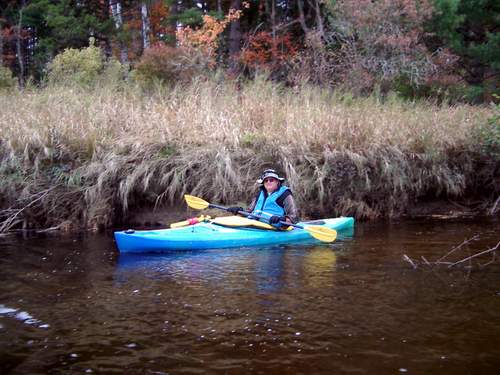