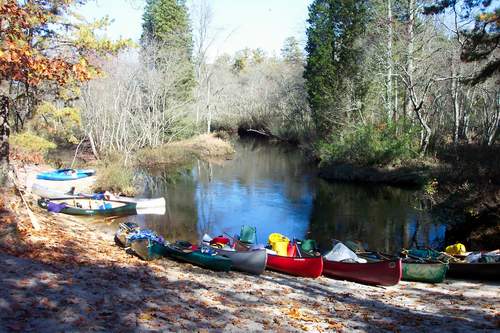 And now for something completely different. A river without rocks, a gentle flow that cradles your boat, and a forest that shuts out the world. Add gorgeous fall weather to that description and you have the weekend in a nutshell. Add in 12 very simpatico people with Martin Wellhoefer in the lead and that is about as good as it gets.

On Saturday, we gathered in Wharton State Forest and lived through the always frustrating, always challenging shuttle. It took a while and many were eating our lunches at Point A while waiting for the 3 drivers to return from Point B. These stalwart 3 were to have walked the 3 miles from the parking area and were so full of energy that they came running along the road to the put-in. Checking the sweat on Phil’s face, I found there was none and figured there was some sub-plot running. They had gotten a ride and hid the last car in the bushes.

We launched and eased along by the Batsto’s gentle flow, got right down to the twist and turns of the river under an overcast but non-threatening sky. Watching paddlers ahead traveling due east while I was traveling due west always gave me a giggle. Cousin It, the droid, mentioned above was riding aft and sitting up tall. Cousin It is a fuzzy character who when on home turf wears shades and carries a tray to deliver your drink. He was to be my Halloween costume for the trip. It soon became evident that Cuz or his furry coat would soon be swept up and away by the low hanging branches and we pulled him down in the canoe out of harms way. He is a p.f.d. and will float but I am fond of his sunglasses and didn’t want them to fall in the drink. We followed the dizzying path of the Batsto for about 3 hours and settled in to an official park campsite for the night. Bob Rancan set about devising a bonfire of enormous proportions. We all schmoozed, set up tents and went out on independent forays into the woods for burnable timber John Franzetti produced a saw and the work began. Soon we had a huge pile of twigs and logs. As dark came on, the cooking began and I most enjoyed observing Martin’s he-man, Maine woods dinner – turkey spam and beans. Could you achieve anything more “basic backwoods”..

Bob lit the fire, starting with a small teepee of birch slats in the middle and soon the structure was ablaze. Never a finer fire have I seen. After dinner the marshmallows came out of Dave’s pack. After marshmallows, Dave Miller did the George Rafferty memorial-streak-through-camp. Wasn’t that a treat!! After a quiet night’s sleep (no bears down here) Bob restarted the fire from the coals while we ate breakfast. While launching we were all treated to Dave’s gunnel dance.

Day 2, Halloween, was sunny and beautiful with some wind. The river widened up a bit

As we weren’t having to dodge rocks and deal with a furious flow, I was able to talk with some of my co-paddlers. Nature has always been my solace and I suspect that is a shared antidote to some very bad things in life. On this day I heard about some pretty awful things that my friends had lived through and they like me seek the peace of the river and woods for emotional sustenance. On a wide turn in the river, one paddler was letting the flow turn his canoe in a 360 rotation. He was looking up at the sky and trees and I sensed the wonder of what he was doing. Let the flow take you, let the river give you peace. Water has always done that for me and I saw it happening to someone else; it makes you feel good. By lunchtime it was pretty warm and we all cooled off on an agreeable beach with the boats lined up in a colorful line which contrasted with the fall colors around us. Cousin It broke out his stash of Halloween trick or treat candies and we did some carbo loading. Once breaking out of the woods onto the lake, the wind was a challenge and some low water areas caused minor hitches for those in big bumpy boats. Take out was a breeze.

The river flowed, the ideas flowed. I was so taken with the new sounds of Dave’s Grumman (moaning over logs, scratching again twigs) which is in contrast to the rocky drumbeat of Grumman’s on the Delaware that I decided to write a Grumman waltz. Time to get out the tape recorder and follow Dave! Jeff was taken with Cousin It’s furry coat and figured it would be a wonderful dry bag cover. How he will fit this up on a kayak I don’t know but he appears to be a really resourceful guy. Bob and John provided a recipe for guaranteed firestarters: take one paper egg crate, fill the pockets with lint from your clothes dryer, cover with wax and presto, a biodegradable starter. I don’t know how many other ideas were born on this trip, but time will tell. It was a wonderful weekend and you should do this trip. 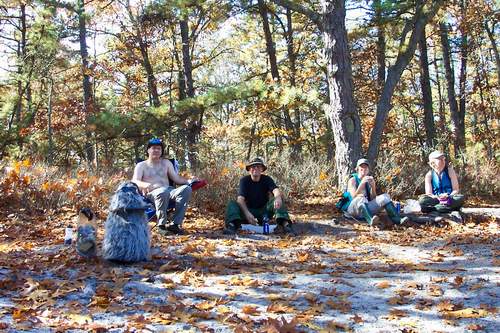 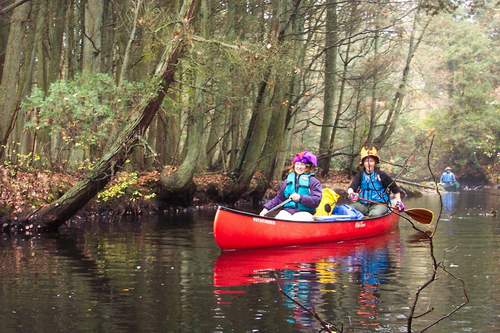 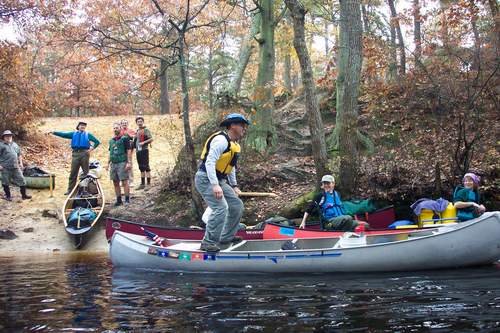 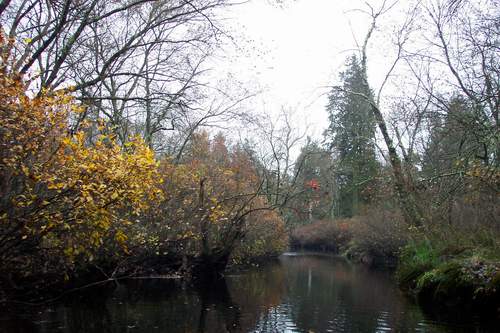 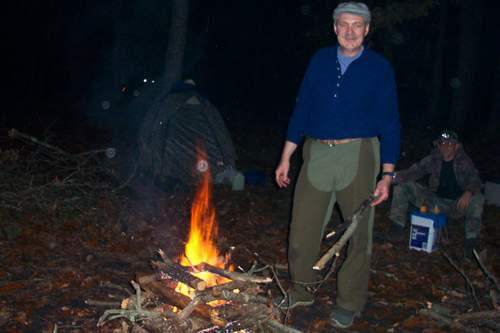 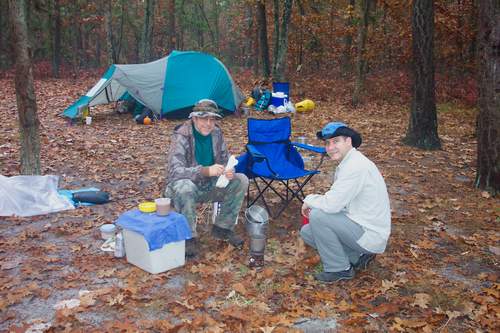 Dave and Jeff at breakfast 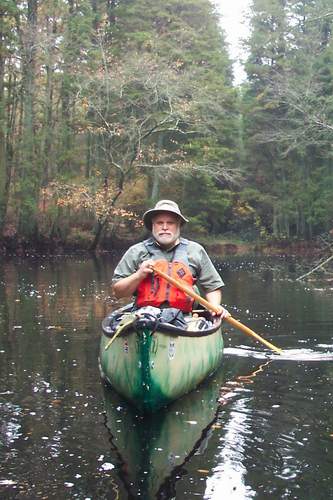 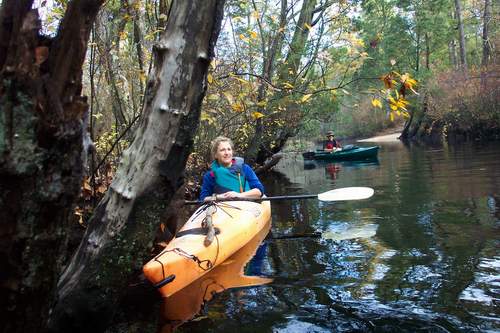 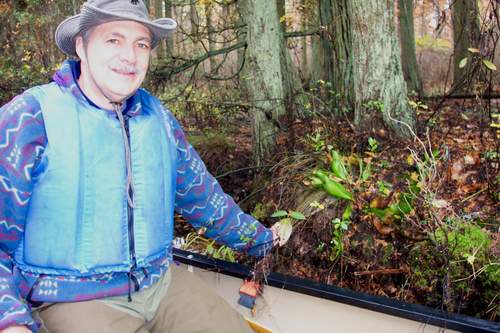 Bob and the pitcher plant 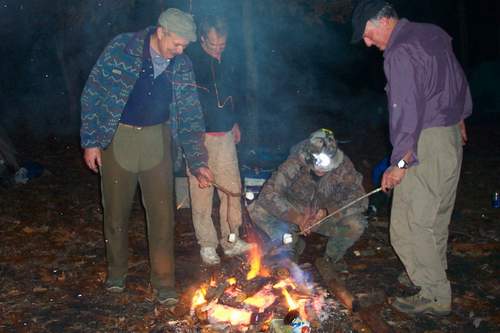