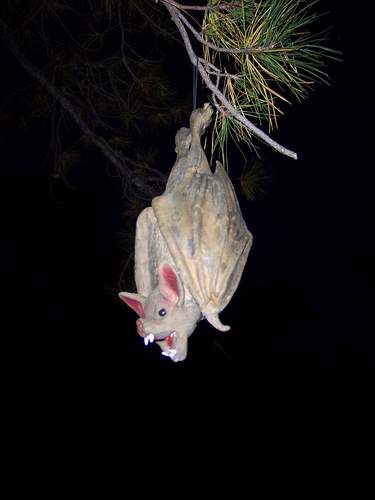 What a nice way to spend a cool, autumn weekend in early November. Our trusty coordinator Martin asked us meet on Saturday morning at 8:00 am at the Richard Stockton Service Area located just past Exit 7A on the NJ Turnpike. We then drove to Atsion Ranger Station where would be putting in our boats. The weather was very cooperative. It was a beautiful, golden autumn morning. The temperature was an unseasonably warm 60 degrees. Fourteen members met to camp and paddle down the narrow and twisty waters of the Mullica River, which runs through Wharton State Forest in the pinelands of New Jersey. There were 9 canoes (1 tandem) and 4 kayaks. Nine automobiles then traveled along the cranberry & blueberry farmland this area is known for, to our “take out” in Batsto Village in Hammonton, NJ. We arrived back at the “put in” and ventured off into the water at about 11am.

This river inhabits beavers, which was evident by the many lodges and felled trees. Gnawed limbs were strategically placed in the water creating small dams that paddlers had to maneuver over. Large trees fell across the river causing paddlers to decide whether to go “over” or to “limbo” under. Having a kayak made it much easier to limbo under the trees as a kayak sits lower in the water than a canoe does. However, I was impressed by the flexibility and balance of our canoeing companions. As they approached the tree, half the boat goes slowly under, the paddler straddles the tree then maneuvers the boat with their feet all the way under the tree; steps back in, and paddle away. Sounds easy but it’s not, especially in moving waters!

One particular area of the river is now designated as “Scott’s Passage”. Scott quickly got to work trimming limbs off a tree that blocked our passage. He guided canoes and kayaks through to avoid portaging. We were grateful for his kind efforts.

We arrived at our campsite at about 4:00 pm and everyone got busy setting up camp (except Jim & Joan who continued to paddle, they didn’t camp). A group of young boy scouts hiked in and camped nearby and were surprisingly quiet. There were 2 outhouses and water to pump nearby. Colorful tents dotted the area. Joe’s accommodations were very rustic. He propped up one end of his canoe against a tree and that was his shelter for the night.

Everyone prepared their own dinner. What a variety. From hot dogs, Tom’s rice and beans to Harris’ filet mignon, which was strategically propped up on a stick and lightly, charbroiled over the campfire. It was delicious. Homemade brownies & oatmeal cookies were also enjoyed. Thanks Bev & Sheryl!

We sat around the campfire for hours talking and sharing stories. At one point, Tom and Jeff battled back and forth telling jokes and limericks. Robyn & Phil provided festive Halloween decorations. Phil carved a Jack O’ Lantern which glowed and grinned at us all. A very realistic bat was hung from a limb.

I have to mention the hats. I wish I got a photo of Martin sporting his SPAM hat. A foam, square hat, resembling a can of SPAM. And Jeff… we lost count on how many different hats he had with him. He stated, “Being a Captain, you have to be able to wear many hats”. Funny guy, that Jeff.

A nice benefit was that Daylight Savings ended during this trip giving us an extra hour to enjoy. We awoke to a beautiful, chilly Sunday morning (about 45 degrees). The birds were singing and another campfire kept us warm as we sat around it and ate our breakfast.

After breakfast, everyone packed up camp, reloaded their boats and headed down the river. We paddled about 2 hours on the last stretch of our adventure to our take out destination near Batsto Village. Canoes and kayaks were loaded on cars. Martin was able to create a pyramid on his Jeep with 3 canoes to head back to the put in where the shuttle cars were waiting. Ten of us met at the Red Lion Diner at the Route 206 circle for lunch.

Along our journey we enjoyed the wildlife around us. Spotted were Wood Ducks, Chickadees, Cedar Waxwings, Robins and several other unidentified birds. I was surprised that the Robins had not flown south yet. It was refreshing to still hear the “peepers” peeping. Guess it’s not cold enough to scare them off yet! At one point, some paddlers came around a bend; a deer was drinking at the waters edge. Who startled whom? Robyn pointed out cranberry bushes along the banks. Scott also had visitors at his tent site. When he woke up Sunday morning, little critters, he assumed were mice, were scurrying under the tent floor! I also spotted a Bald Eagle flying over the lake at Batsto Village as we were walking back to our cars.

Overall, it was an excellent adventure. The weather was beautiful, no one fell in, no one got hurt, and everyone had a great time. I find that with every trip, paddling skills are refined and improved. The members in this club are very friendly, patient and helpful. It is a pleasure paddling with you!

A special thank you to Martin who organizes this trip every year. It’s a great trip! 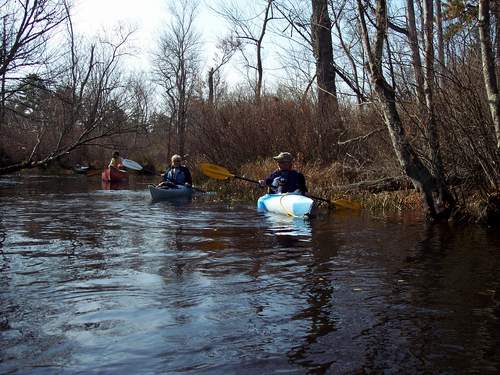 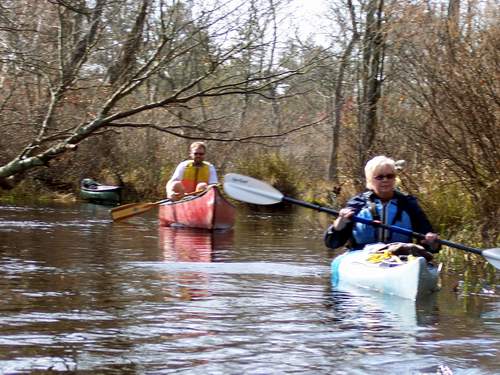 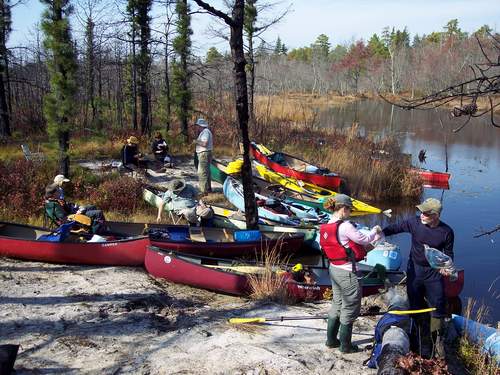 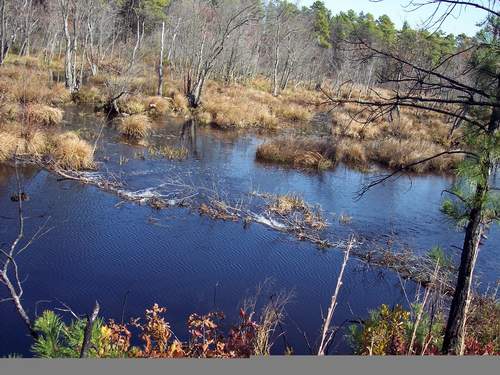 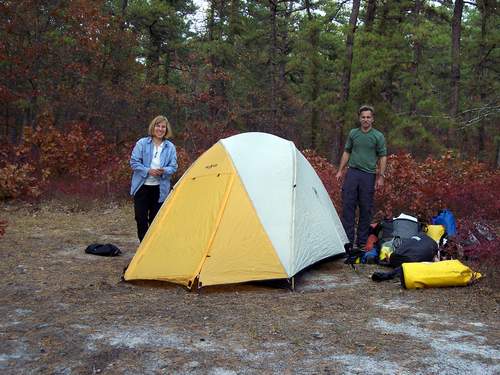 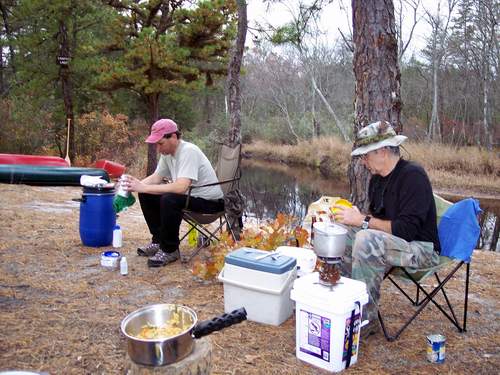 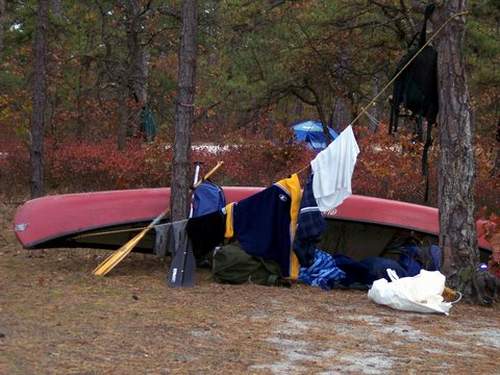 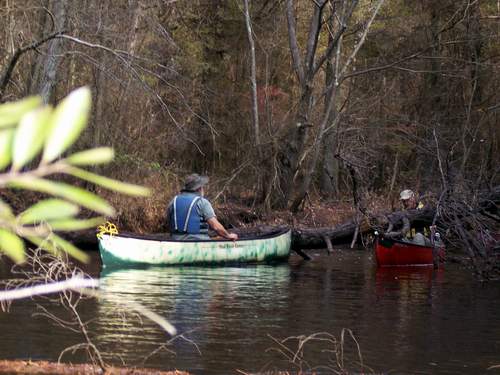 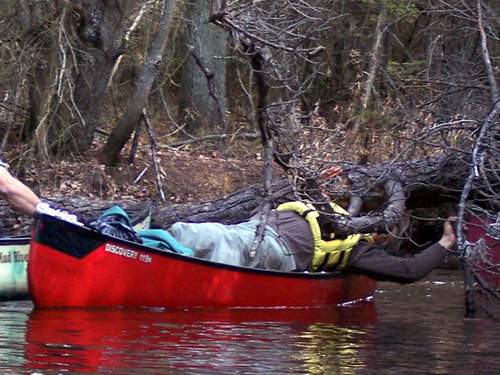 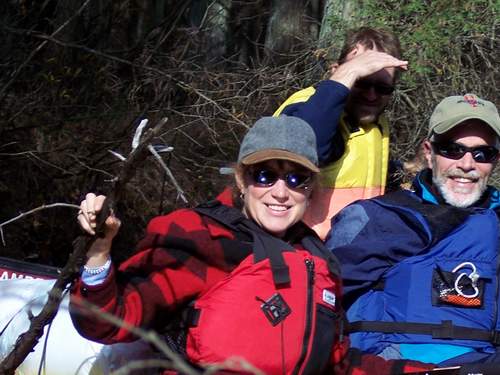 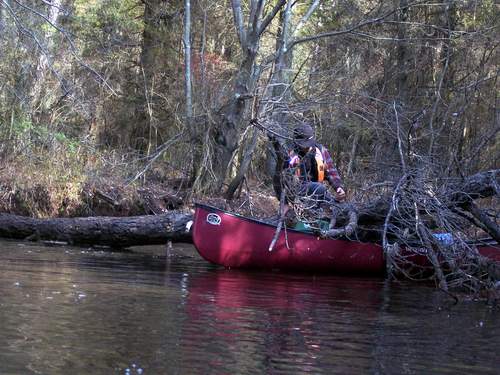 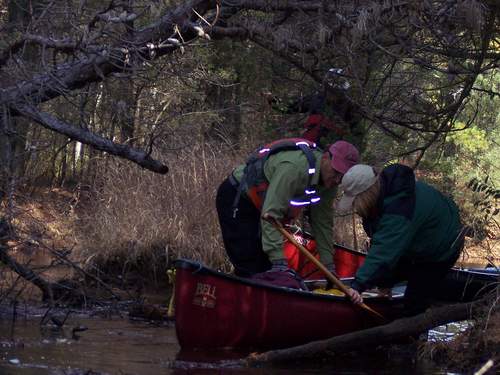 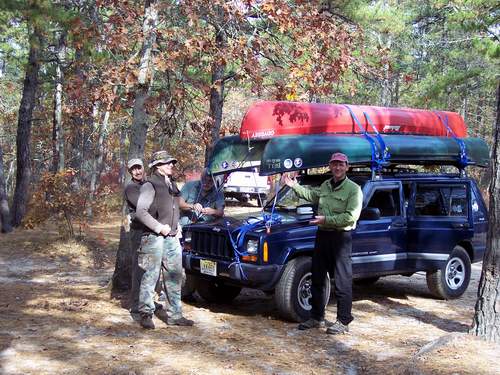 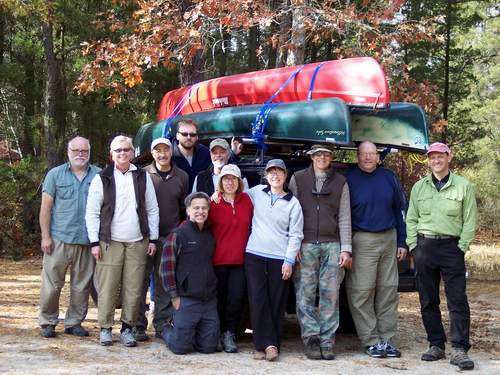