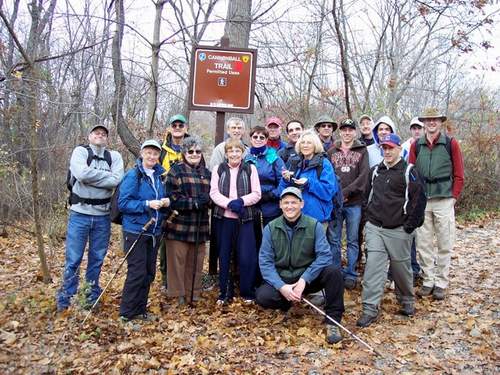 Some HRCKC diehards won’t stop paddling until the water gets too hard to dig in a paddle. However, by November I suspected many had sponged out the bilges one last time and thoughts turned to a recurring topic that kept surfacing in conversation all season; “I LIKE HIKING TOO - LET’S GO!” And so the opportunity was posted to put our hiking boots were our hearts were and 20 members took the bait…uh… joined for a hike on a fine brisk Sunday morning.

The Cannonball Trail was born, rich in history, as a means to move supplies, including cannonballs (I presume) during the Revolutionary War out of sight of the British (see Bob Rancan for the full story.) The trail goes from Pompton Lakes up to the NY/NJ state line in Mahwah. Many of us will know of it by its pedestrian overpass of Rt. 287 on the hill just west of Oakland. All were excited to hike on this long familiar landmark. The trailhead was easily found and parking was plenty adequate for all our cars. Lori Baumann was able to walk to the trail from home.

Several members brought digital cameras and were itching to start snapping pics. Betty Wiest herded us into formation at the trailhead and Laurie Cochran and she did the honors of group photos – ah! notice no PFD’s on this trip (hope we aren’t testing the rules here.)

The plan was to take both the Cannonball Trail and some side trails to allow for figure eight loops with the 287 overpass at the center. The first trail gained elevation quickly, is un-groomed and was covered in wet leaves making it evident this was no walk in the park. We strung out as some burned-off adrenalin and others picked their way slowly up the first hill. As we waited to regroup at the first level spot we sadly bid farewell to a few who turned back. The rest pressed on in inchworm fashion, as we allowed for the varying paces of the group, in order to stay in touch throughout the hike. I knew all were enjoying themselves when conversation early turned to plans for future woodsy adventures like snow-shoeing.

It took about a half-hour to reach the infamous Rt. 287 overpass – more pictures taken and a wave to the occasional toot of the passing cars. I didn’t want to linger too long as I pictured the distraction causing a huge pile-up below – an incident I didn’t want notoriety for. The trail leveled out and we made our way north through a wet stretch. Waterproof hiking boots were an asset but all pushed ahead easily regardless.

About one hour into the hike, we were near Ramapo Lake but branched off of the Cannonball Trail to head west towards a clearing overlooking the Wanaque Reservoir and the mountains of Norvin Green State Forest. It was a good place to enjoy a snack with a view. The weather was turning more cloudy than sunny and the wind was coming in strong from the northwest. In short time, everyone felt the chill creeping in and we headed back out from the windy side of the mountain towards Ramapo Lake.

Ramapo Lake is a pretty mountaintop body of water that is easily accessed from several places to park and walk in from Skyline Drive in Oakland. It is ringed by an old road bed which branches off into the surrounding mountains and is a natural attraction to enjoy mountain biking, dog walking, etc. We hiked along the west side of the lake, on the Cannonball Trail again for a while, and took another old road which branched south to the yellow blazed trail which loops back down the mountain and intersects with the Cannonball once again near the 287 overpass.

Some light rain surprised us as a squall blasted us crossing the pedestrian overpass but we were quickly back in the heavy woods and made our way down the Cannonball to the Pompton Lakes trailhead. The trail skirts the old DuPont explosives complex that has left a legacy of groundwater contamination in the community. The site is largely wooded and did not distract from the natural enjoyment of the area – on the surface at least.

After approximately three hours, we all arrived back at the parking area with smiles still cracking. Most had leaf raking chores to run to but a few found their way to the local Irish pub in town – I wonder how I know that.

Looking forward to repeating the fun again. There are so many similar hikes available in our area that fresh opportunities seem endless. 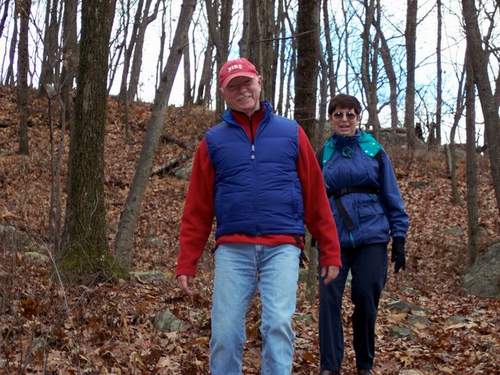 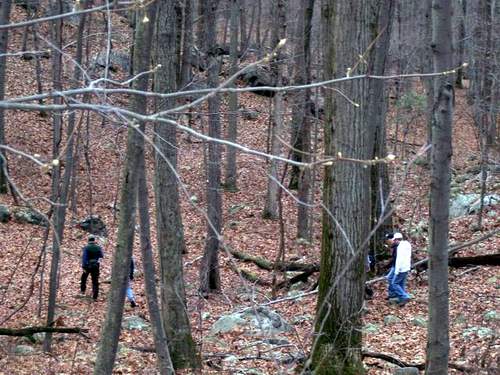 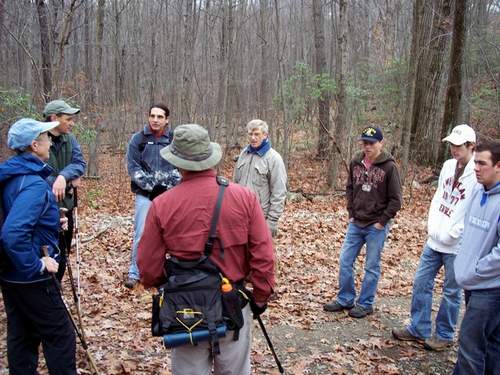 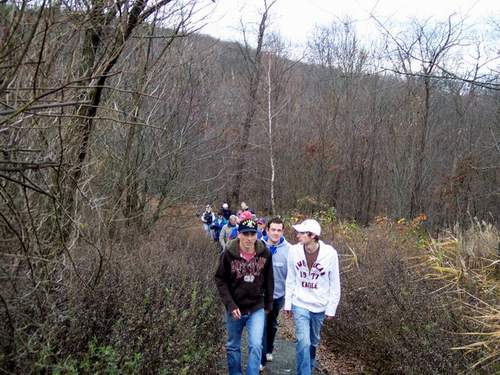 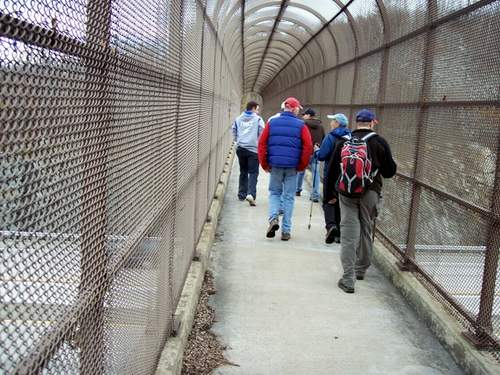 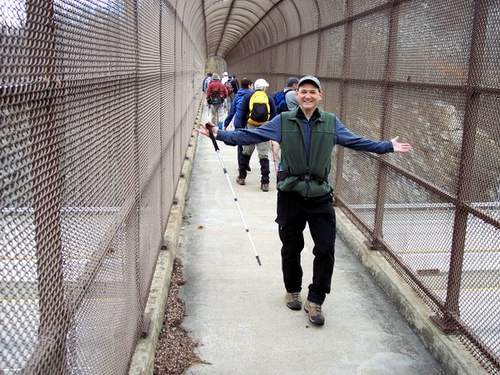 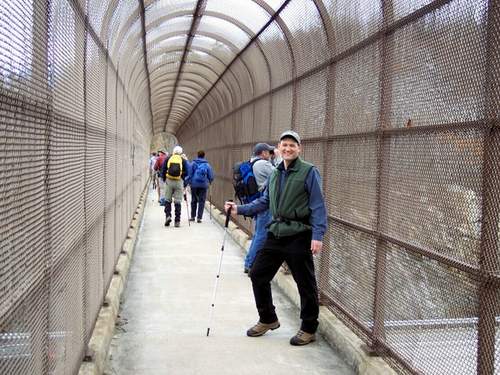 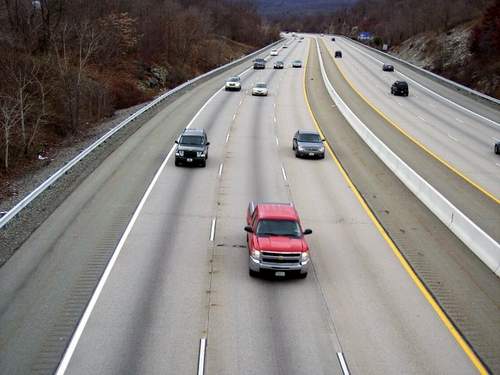 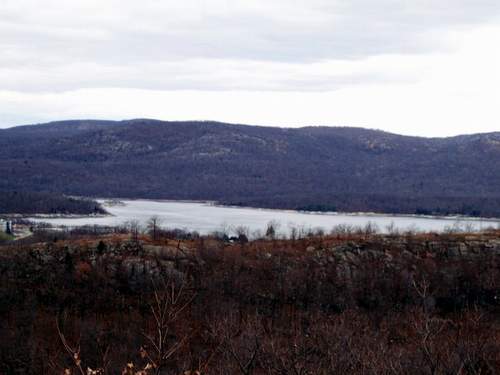 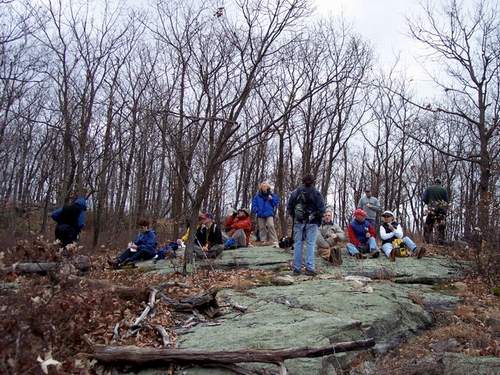 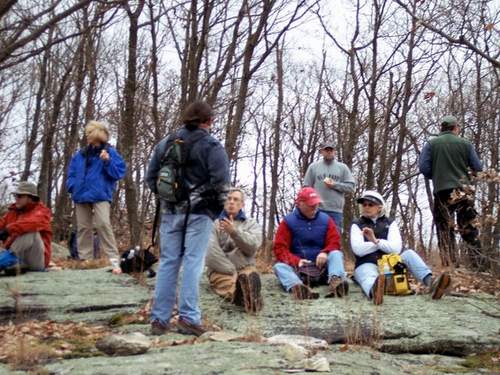 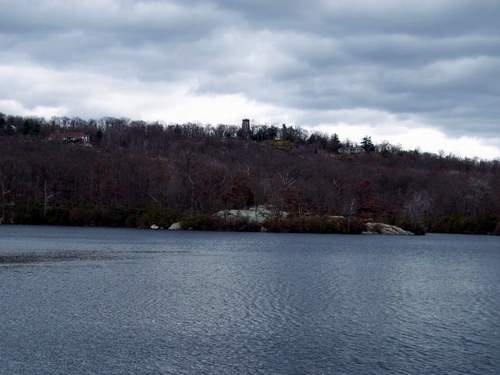 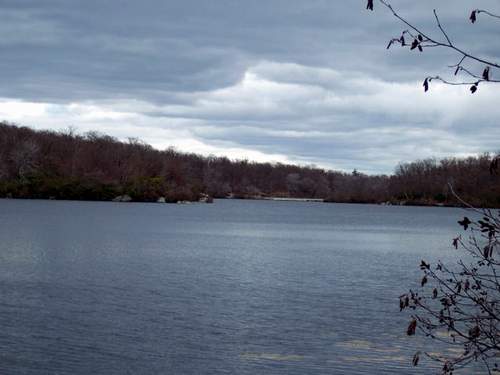 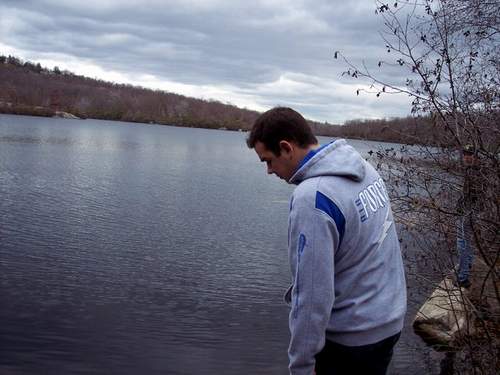 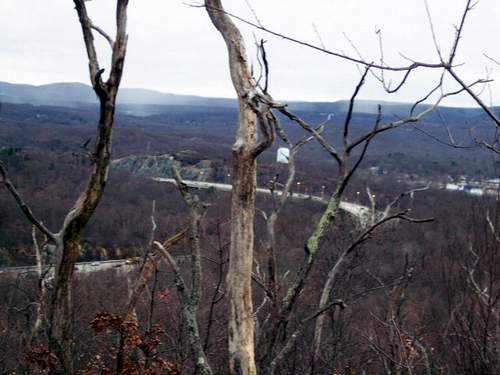 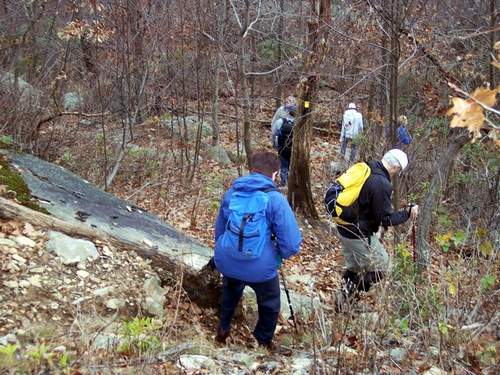