Another fine day in the great outdoors! The weather was a brisk 35 degrees and the sun was bright. A great day for a hike! Ten members bundled up and met at 10 am in the large parking lot of Ramapo Reservation located off Route 202/Ramapo Valley Road just south of Ramapo College. Ramapo Reservation appeals to many for the various elements it provides. Easy walks around the pond, ruins of a Mill and the A.B. Darling Estate and dairy farm, two old mines, steep trails, mountain views, babbling brooks, Macmillan Reservoir, and a beautiful waterfall. Many enjoy bringing their dogs, but they are supposed to remain on a leash, however they feel compelled to let their dogs roam free. We encountered several dogs, but no problems occurred! They were all very well behaved. We once again brought along plastic bags to haul out any litter would should find along the way. I am happy to report we only found a few items. (The old car we had to leave).

After a group photo, we headed down the main trail, which is the start of the Silver Trail (aka Macmillan Trail), across the bridge over the Ramapo River who’s banks were flooded. The river was high and moving fast. A few commented on how interesting it might be to be paddling it. Probably not a good idea!

We continued straight enjoying the views of Scarlett Oak Pond. Just past the pond, at the base of the trail, we veered off to the right to head up the steep Green Trail (Halifax Trail) on our way to the Hawk Rock overlook. There were beautiful views overlooking Mahwah, Ramapo College’s campus and Manhattan. A few more photos and on our way across the gas pipeline to the blue/white trail (Havermeyer Trail) on to the white trail (Connector Trail) and to the blue trail (Ridge Trail). Along the way, there were interesting things to see. Some strange looking old trees and beautiful ice crystals forming out of the ground fascinated us. A babbling brook got everyone’s attention too. Somehow you just can’t help being drawn in by the sound and it’s beauty. Ice formed on the rocks, which glistened in the sun, a vision that brings you inner peace.

Scott, being the adventurous type, asked the group if they would like to “bushwhack” to a rock outcropping with nice views over the eastern shore of Macmillan Reservoir. We all agreed and it was worth the trip! We were high above the water and had views of Matty Price Hill, Campgaw Mountain Ski Area where we could see them making snow. We ventured down the rocks like mountain goats and connected with the Blue Trail (Ridge trail), which loops around the reservoir, and again we made our way back on the Silver Trail. We decided to head onto the Yellow Trail (Waterfall Trail) to view the rapids flowing over the waterfall. Icicles hung majestically off of the branches extending over the cascade glistening in the sun. Some more group photos, then back down the mountain passing by the ruins of another old, and two-room stone foundation. We crossed a nice wooden bridge over the stream and headed back to the main trail to the parking lot. A total of 4.25 miles in about 3 hours!

Hiking in small groups like this is a lot of fun and very social. Having someone who really knows the trails takes the pressure off of you and you are able to just enjoy the hike and become familiar with it so you may try it on your own sometime. Thank you to Scott for being such a great trail guide! 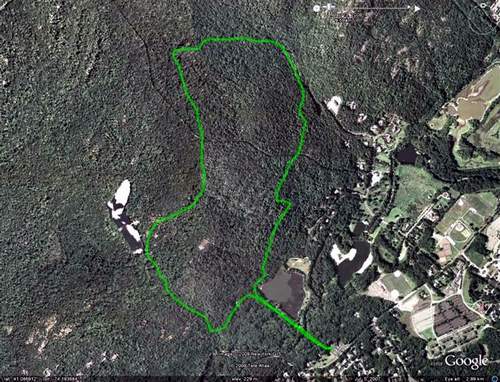 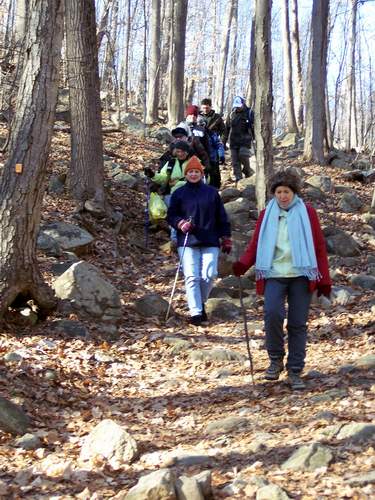 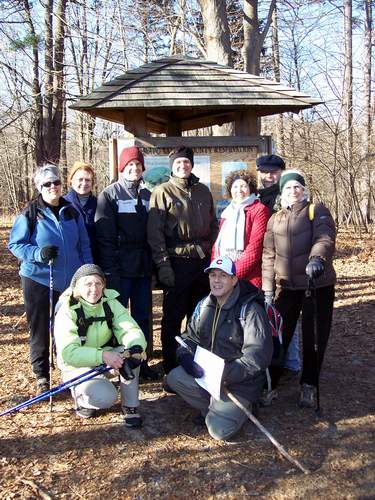 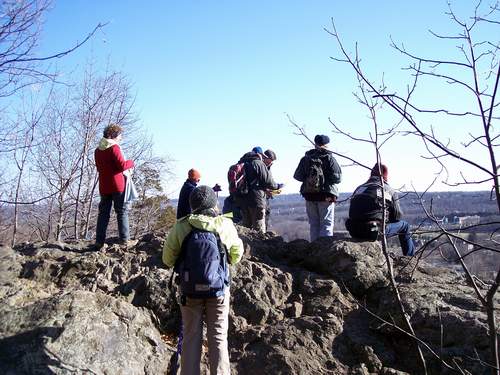 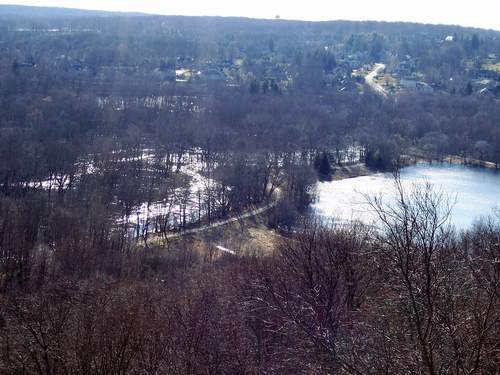 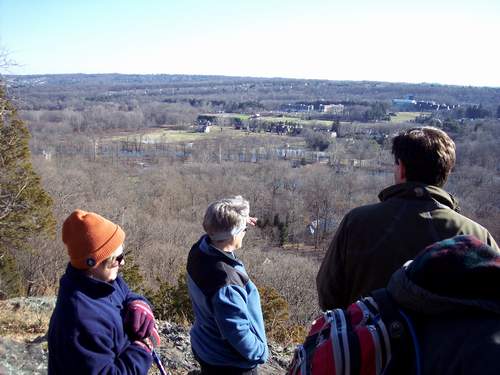 Views over Mahwah and Ramapo College 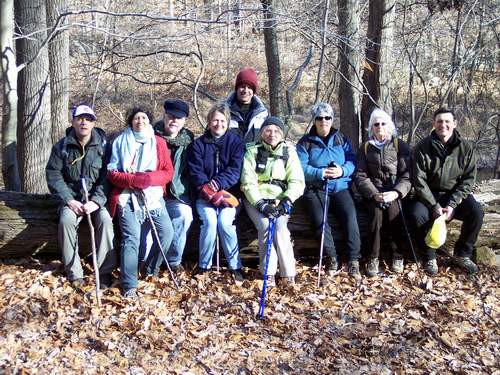 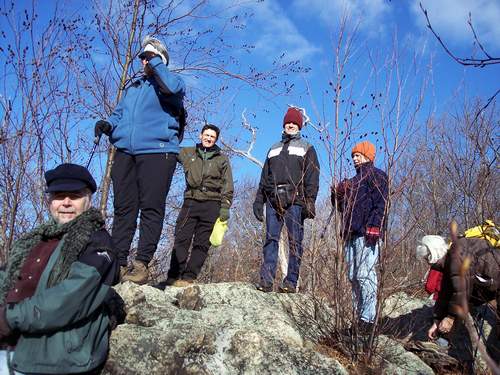