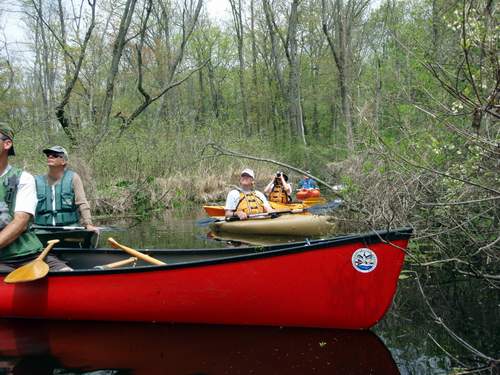 Our trip started auspiciously with a lecture from a Fish & Game warden at the put-in. He told us of kayakers getting lost in the back stretches of the Black River, and how local authorities had to effect nighttime rescues. He mentioned that kayakers were found, in the dark, standing in freezing water. He then said, “But you look like an experienced group - just be careful, because thunderstorms may be coming through.“ We listened politely, and set off. Within ten minutes, we were enveloped by quietness. Every now and then, the stillness was broken by John announcing “There’s another tree down”. It seemed as if the channel had not been maintained in years. Remarkably, we had to portage around only three blowdowns. We were able to run the others (either before or after some judicious pruning). We also spent a good deal of time deciding which rivulets through the vegetation represented the true course of the river. Finally, hours later, we got to the heron rookery and were rewarded with the sight of at least 22 nests. At this point, the river finally began to open up and turned into a navigable stream. Further down the river, after wending our way through the marshes, we encountered three very low bridges. After playing limbo underneath the first, we had to give up and portage the next two (almost getting hit by an ambulance and a subsequent police car while we were carrying the canoes across the road). Finally we reached the sluice gates. We ran the gate on the left and had the joy of paddling moving water from there to the take-out at the mill. No one swam, no one got lost, no one complained. A very nice day on a very quiet part of New Jersey. 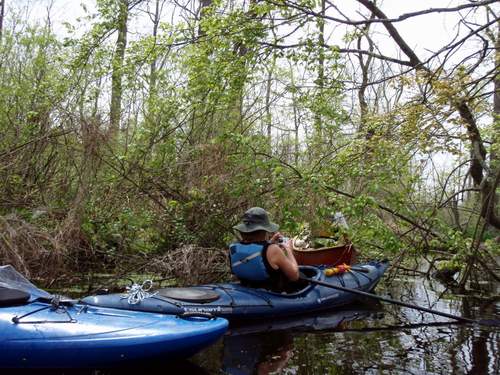 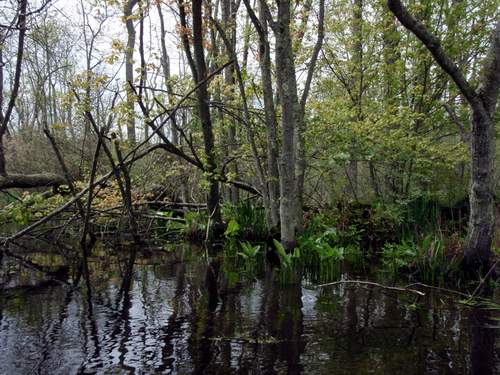