It was a beautiful summer day, temperature about 85 and the sky clear except for a few cumulus clouds. There were 26 paddlers and 23 combined canoes and kayaks; mostly kayaks. We met at 9:15 and put in at 11:15. After all the recent rain the river was high and fast and we moved along at a nice clip and we averaged four miles an hour for the trip. The trip was 16 miles long.

Lunch was at the north end of Bull's Island. Just below the lunch spot was a wing dam. A wing dam is a low two section dam with each section partway from the shore leaving an open channel in the middle. The dam extends from the shore V-like down river. The function of the dam is to generate a fast moving center channel to prevent silt accumulation and also to help prevent erosion of the river banks. The river was high so the water was running well over the dam.

Before taking off after lunch we did observe two kayakers go directly over the dam without upset, so it seemed like the dam would not present too much of a problem. However, being a relative novice I decided I would take the least challenging path and go through the center channel. I tried to paddle to the center channel but did not go upriver far enough to allow for the current carrying my canoe downriver. I reached the dam with my canoe sideways and over I went.

I had my PFD on and the water temperature was comfortable (I would guess about 75 degrees). With John's guidance and efforts, we towed me and my canoe to shore and it all ended well. After a brief rest we continued on our trip. Two other boaters, better paddlers than I, also went over so I didn't feel too bad.

The rest of the trip went very well. There were towed water skiers, powered ski boats and groups of tubers on the Delaware all enjoying the very pleasant day. The scenery was lovely. The wind picked up at the end blowing upriver and causing us to paddle a little harder. We took out at Victoria's Station in Lambertville.

After collecting our boats Ed and Karen, John and Linda, Mo and Cheryl, Phil and Robyn, Herta, Ken and Roberta, Mike, Frank and I joined together for a supper at Gallasso's Italian restaurant in Frenchtown. The forenamed paddlers brought wine and beer which added to the festivities. It was a wonderfully enjoyable trip.

In payment for the aid John provided, he "volunteered" me to write this trip report. I think that was a good idea. It ought to be the policy of the club that the first one who overturns their boat should be required to write the trip report. That will inspire us all to improve our paddling skills! 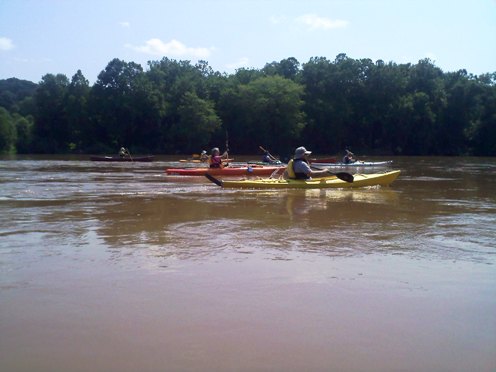 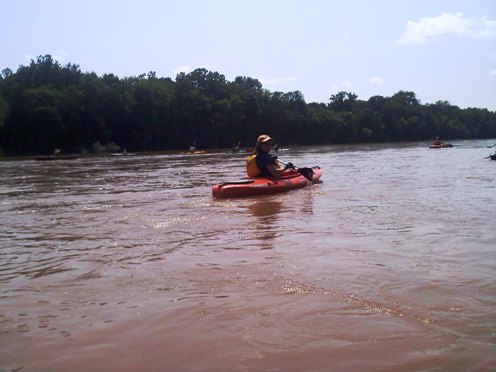