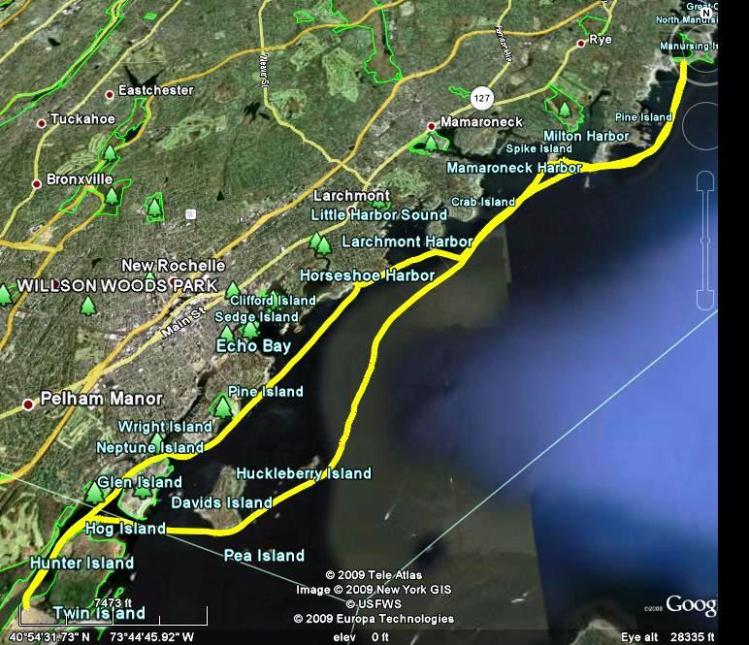 Three sea kayakers, Bill B., Rick L. and I met for a 9 a.m. launch to start a paddle to Rye Playland. Following a painless, 20 minute, traffic-free ride from the GWB, we launched in climbing temperatures under a clear sky into the lagoon opposite Orchard Beach...aka "da Riviera of da Bronx". We paddled out and around the collection of islands at the western end of Westchester. These islands are all ledge rock and boulders and have a Maine look to them. We paddled east past moored yachts and the private clubs and homes lining the shore. Once east of all the island we headed back along the coast and made our first stop at Hen. We met a canoeist/lawyer here (in his homebuilt Kevlar boat) and had a brief discussion about our right to land on shore as long as we're below the high tide - we no sooner finished our discussion when a gentlemen walked down the beach and very politely told us this was private property and we had to leave.

We no sooner portaged over the narrow part of the island and headed away from shore when off to our north a multi-colored flotilla of flailing paddles appeared. It was the other HRCKC kayak trip heading out of Mamaroneck. We chatted briefly and continued on our way to Rye Playland.

As we were nearing our lunch stop, a 50mph "Miami Vice" type power boat came so close in front of us we had to backpaddle.

Lunch on the rocky Playland Beach with a bonus visit from the Park Ranger.

We then headed back west and then out into the open waters of Long Island Sound. The hot afternoon brought out more powerboats and resulting boat wakes provided more enjoyable textured water. We passed though a little opening between a long rocky breakwater and a rocky point of land. Behind the breakwater, sheltered from the slight cooling breeze it was HOT! The chart calls it Satan's Toe...aptly named.

Our final stop, the only non-private beach we could find to land on, was appropriately named Dog Beach. It was basically a dog water park where the dogs rule. Swimming, running, fetching, sniffing...they were all having a great time!

It was an interesting paddle, with great company on an almost too-hot day. We logged a bit over 20 miles, were on the water about seven hours and had an equally traffic-free ride back to Jersey.