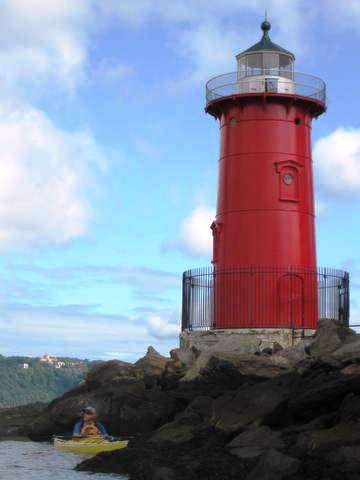 The Mighty Hudson
by Betty Wiest

If you’re into strength building, this was the trip to be on. What a work out!
I think all of us (well, all except one or two of us) who went on this paddle were challenged by the degree of current. And, in the end, as we were returning to the launch site, I kept thinking that each stroke was mind over matter.

Life’s opportunities don’t always dictate the practical side. Sure, would it have been easier to time our trip with the flow of the tide? Absolutely. But other commitments are what make us decide how we can best fit the joys of our pursuits into a manageable time frame. Because two of us had a Noon commitment, this paddle was moved to an earlier start time. Would that have made a difference in the tide, I seriously don’t think so.

Nine energetic paddlers (George, Christine, Ken K., Ken B., Tim, David, Lucy, Neal and me) with eight boats met at 9 a.m. at the Englewood Ross Boat Launch below the George Washington Bridge. We were very cognizant of the sign that indicated that only boat traffic was allowed to proceed down an auxiliary road to the launch (notice I did not write only trailered boats). And when I approach an individual stationed under the bridge he was only concerned about us not going beyond the serious rock border between the parking lot and the bridge itself; he was not concerned at all about anything relating to boating. We clearly got the message and parked our cars.

We discussed and decided on a course which turns out to be a duplicate of one I had paddled a month or so ago—paddle to the little read lighthouse, proceed down river, paddle across to the Binghamton and back up to the bridge. In an effort to avoid the pull of the current under the bridge I thought it would be good if we paddled north along the Jersey side for a distance and then paddle across. We did just that and got about two-thirds of the way across but discovered the tide swiftly took charge and so the last part was an effort to pull up to the Little Red Lighthouse. We all made it! At one point we all took a break, rafted up, and joined our kayaks to pose for a Kodak moment in the shadow of the lighthouse (thank you George Mulhauser).

Along the riverbank, people were out walking, jogging, biking, fishing or just “hanging” out. We saw evidence of a makeshift residence complete with tarp. The park rambles on for blocks. We paddled along the New York side till the end of the major water treatment facility (the one with the park on the roof), then made our way across the river in a well-organized contingent to head off any of the power boats that were starting to make themselves known as they speeded up and down the river. We made sure we stayed clear of the barge making its way toward the NY harbour. Even as we crossed the river, the current was still going out, taking us with it. I kept thinking, “Can we call it quits and have someone pick us up here? This is right where Neal and I need to be latter on in Edgewater!”

We finished our trip back at the launch site with the sun shining more brightly and our spirits soaring like the hawks above us.

Dave Schreir, paddler, had this to say, “One of the things that made this paddle interesting was that there were many sights to see on both sides of the Hudson, so paddling against the current was not an entirely bad thing. Traffic on the river was fairly light and made it easier for us to concentrate on paddling….a great way to spend a Sunday morning!”

Oh, and did I mention that our trip on the Hudson coincided with the festivities over the course of the same weekend an ongoing celebration of Henry Hudson’s discovery and sailing the Hudson! Thanks for Jim More for sending pertinent information on the expanded regulations for boaters during the event. We did not interfere as most activities took place below the Intrepid in the harbour. 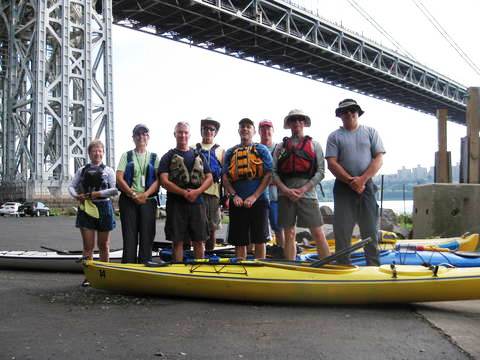 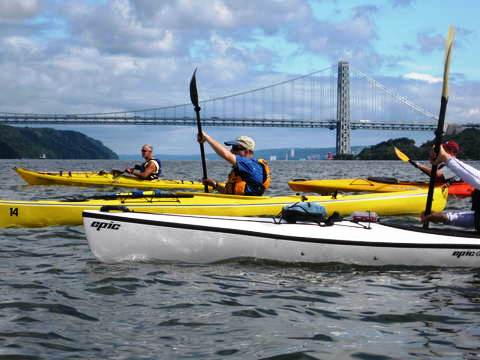