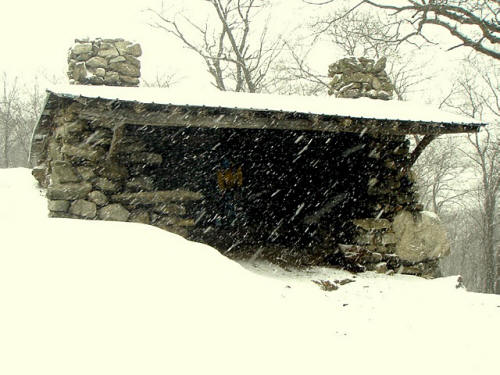 Our night hike began after a car pool from Rt 23. We met at the Trail head parking area in Harriman State Park about 6 pm, heading up the trail after about 30 min of fussing, signing trip waivers, etc.

A little cloudy but a full BLUE MOON lit sky, no leaves on the trees and some snow in the woods made for an easy to follow trail. (Headlamps in place but not necessary.)

Of the 5 of us, most had not hiked at night and I think all became more comfortable as time passed. I laid back and let the others lead the way for 2 miles to the top.

The trail is a mix of fire road for 15 minutes, then along a frozen stream for a while, then a turn up-hill and along the side of a mountain until you come to a cave (good camping spot,) then a 20 vertical ft scramble up some icy rocks - whew! Then the woods open up for a while until you reach the top and there is a stone shelter which we reached by about 8 PM.

After hanging out for a while and checking out the views and various camping spots for future trips, we headed down. Jim stayed at the lean to and started a fire, while I led the others down past the cave shelter then some.

All were comfortable and Paul put his GPS to good use. I hiked back up to the shelter as the others headed the rest of the way down to the cars. Spotty cell coverage at the lean-to shelter still allowed a 10:15 PM call saying all were safely down at the car.

I forgot how the weather was that night. Oh that's right, cold as heck! Actually only the mid-20's. Jim and I awoke to a surprise snowstorm which dropped about 3-4 inches of fresh snow. A short breakfast, then headed out on the trail down. A little more slippery than on the way up - after 2 falls I donned the snowshoes.

All in all, a pretty decent hiking experience for the group.

PS: A Blue moon is the 2nd full moon in the same month (looked the same to me.)