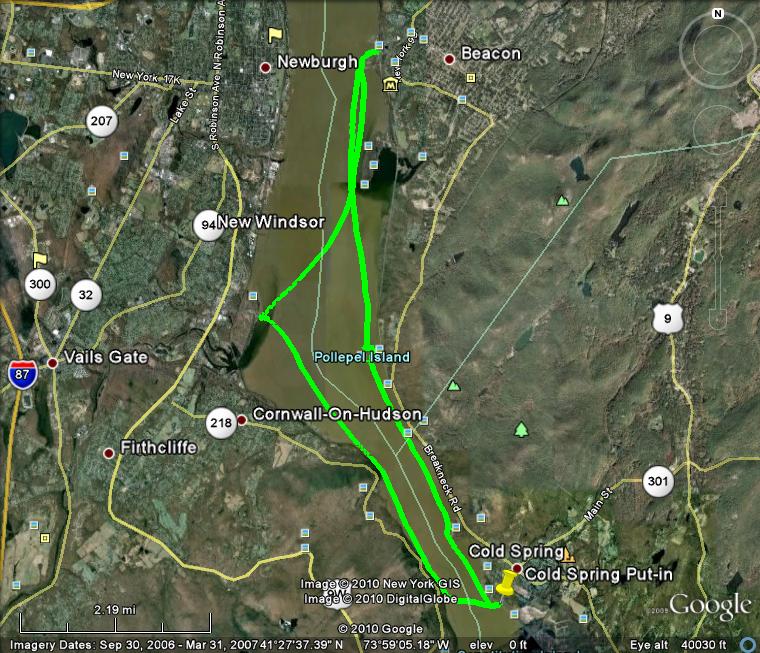 With the start of our second back to back heat wave of the summer, the day was forecast to be plenty HOT! Six sea kayakers: Tony F, Dave M, Bill B, Phil B, Monica O, and Ted C met me at the Sloop Club in Beacon. We gathered on the ramp, prepped our boats and reviewed a few heat stroke avoidance procedures anticipating the toasty 95 degrees.

Launched into the Hudson and headed south along the eastern shoreline. Soon we encountered two paddlers heading north with a third empty kayak in tow and a swimmer behind the kayaks. He had swam the one mile across the river from Newburgh (heading to Beacon) and had under estimated the river currents. Now that he had made it across the river, he had to swim north against the ebbing Hudson to get to Beacon.

Continuing on, we passed Denning Point where primitive (free) camping is allowed as part of the Hudson River Water Trail. Just to the south there was floating monitoring station that looked to be recording meteorological data as well as tide, current and water temperature.

The next highlight, Pollepel Island, is the home of the very decrepit Bannerman’s Castle. The castle was built by Francis Bannerman to replicate a Scottish castle. The Castle/Arsenal was intended to house his extensive collection of military equipment and explosives from his military surplus business. After purchasing 90% of the captured weapons and munitions from the Spanish War he had been asked to remove them from his Manhattan storefront on lower Broadway. Building a Scottish Castle on an island in the Hudson became a logical solution. Under construction for seventeen years, Bannerman died before completion of the castle.

Everybody wanted their picture taken in front of the castle.

We continued south past the imposing Breakneck Ridge where we could see hikers, although from our vantage point they looked more like climbers. Our lunch stop was on the sandy beach at Little Stony Point. Some did a bit of exploring of the area and others relaxed and soaked while Phil and Monica had a rolling lesson.

After lunch we got back on the water and made our way to Cold Spring. Monica and Phil had pre-staged a vehicle here. The paddle ended here for them.

We then began our return trip north just as the Hudson was beginning to flood north. To add a little new scenery to the return trip, we crossed the river and headed up the western shore hugging the base of Storm King. As predicted, the afternoon breeze filled in along with more commercial traffic than we had seen all morning. At one point we had three tugs with barges within less than a mile of us……sometimes much less than a mile.

A brief stop was made at Plum Point where Dave did some "begging for burgers" (or in this case fajitas) from some picnicking locals.

Our final leg back to Beacon proved to be a bit more challenging due to the wind, waves and the heat of the afternoon.

As advertised, the trip ended up being about 6½ hours and a little under 16 miles.

Plenty of water, some rolling, hat soaking and swimming seemed to keep everyone cool enough. I think heard Tony say it was a little chilly in standing in the breeze at Plum Point.