This was the 4th of 6 day trips that will cover the almost the entire length of the Upper Delaware Scenic & Recreational River over the course of the 2011 paddling season.

Ken, Christine, Fred, Joe, Jane, Gail and Ted joined me at the Lackawaxen access parking area at 9:30. One person was a no show. We consolidated boats and four cars headed for Narrowsburg with Jane leaving her car at Ten Mile River (for a shorter trip) We got on the river around 10:30 with the Barreyville gage reading 3.2 feet and a water temperature of 72. The forecast was for mostly sunny in the am, a noon shower and cloudy in the afternoon with rain coming in early evening. The weather man lied. We saw no sunlight the entire trip.

We decided to accept Fred’s suggestion that we put in on the PA side to avoid a half mile of flat water, although Gail was quick to launch and went up to the narrows to admire the rock formations.

By 10:45 everyone was on the way through the four miles or so of flat water that took us through a very pretty, though isolated stretch of river and eventually brought us into the #9 railroad bridge rapids. This was a modest class I and was the site of a drowning two weeks ago. Another mile and a half of light riffles brought us to the rapidly flowing chute at the confluence with the Ten Mile River.

Since it was then 12:30 we pulled out on a hard bottomed beach just below the confluence and walked about a hundred yards along the trail to picnic tables at the National Park Service TMR access area. We chatted for a few minutes with the NPS interpretive Ranger as we enjoyed lunch.

The weather was still mostly dry although we had paddled through a five minute shower of light rain around noon. After helping Jane get her kayak loaded our seven remaining kayakers headed down stream toward the three remaining significant rapids on our trip.

As we passed through Masthope rapids, a mile later, I told a couple of people the legend of the naming of the Masthope settlement.

Masthope is a pretty straightforward class I – II rapids at 3.2 feet with a pretty obvious line. A half mile later Colang and later still Kunkeli rapids were more technical with currents that swept in arcs around rocky obstructions.

Everyone made it down the remaining mile to the Lackawaxen access without incident. Some of us did get hung up on scratchy spots and had to hike a bit.

The rain came in around 2:30 starting as a light drizzle and gradually increasing in intensity until it reached moderate proportions around Kunkeli rapids. The lack of contrast and fogged glasses made me with for a finer sense of hearing so I could paddle by ear, but the temperature was warm and most of us didn’t bother with paddling jackets.

I was the designated shuttle driver for the four car group and dropped all the drivers off around four before heading for home into Pennsylvania. 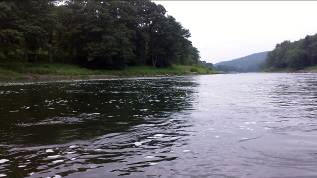 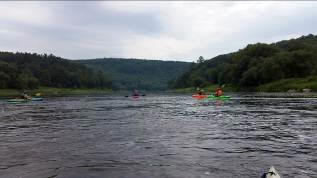