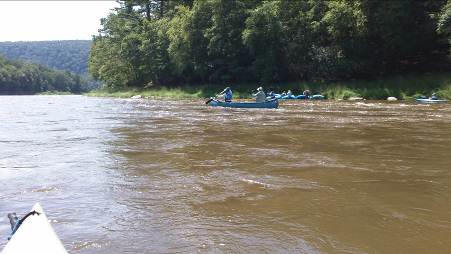 Weather: Mostly clear and a high around 85, moderate humidity and light winds from the southwest.

We expected water temperatures around 70 at a level of 4.2 feet. Rain Friday evening brought the river up to almost five feet which produced much different river conditions than expected. The water was a light brown color and moving very fast.

Our whole group of 10 people, Jim, Carole, Lori, Lauren. Arlene, Tajalli, Joan, Lori Christine and Gail met at the Lackawaxen access area at 9:30 and unloaded out boats. We did a shuttle and left three cars at the Kittatinny Canoe base at Pond Eddy. There was a $5.00 per car parking fee and a $2.00 per person access fee.

I should note that I neglected to pack my booties when I loaded the Suburban and as a result went slightly bonkers at the put in when I realized my mistake. Fortunately Kittatinny had a pair of water shoes in my size for only ten bucks. I guess I’m not the first one to need that service.

Tajalli was on her first trip with a new skirt and I had left Gail to spot her through a couple of wet exits before going on the trip, but because the water was so muddy she chose to not use the skirt.

In any event we got on the water by about 10:45 in good order and passed under the Roebling Bridge shortly thereafter. Because of the high water we encountered a bunch of standing waves, but no scratchy spots.

Cedar Rapids offered some high and squirrely waves with only a poorly defined channel. Shohola Rapids was pretty much continuous at this level, but again everyone managed without incident. In fact no one had much to bail at the bottom.

As trip leader I was extremely pleased that the whole group stayed together unlike some trips where everyone wants to race ahead.

This brought us to that time of day when most paddlers seek to replenish their caloric reserves with lunch stop. There were a couple of nice looking spots that we had to pass up because the shore line was too steep and slippery with the water so high. Gail and Christine went a bit ahead of the group and located a great spot on a stony bar.

From the lunch stop onward, about 6 miles, we knew there were no significant rapids and looked forward to trudging along in very flat water. As it turned out the river was kicking us along at light speed and we reached the take out around 3pm after passing a few surprise rapids.

The take out was crowded with livery personnel packing rafts in their trailer, but when we responded to their challenge with the word that yes we are in the right spot and had contracted to take out they became pretty cooperative. We still had a steep hill to carry the boats out about 15 feet vertically and about 150 feet horizontally.

Jim loaded his car with help from a couple of others and ran the drivers back to Lackawaxen on his way home. 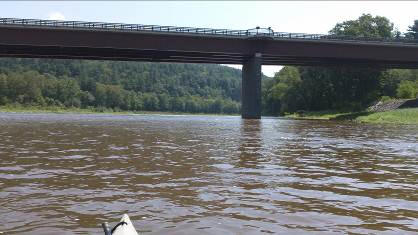 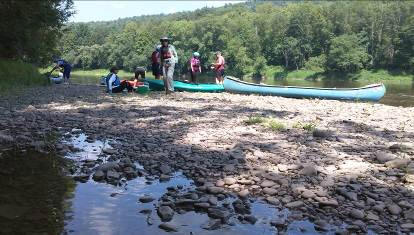