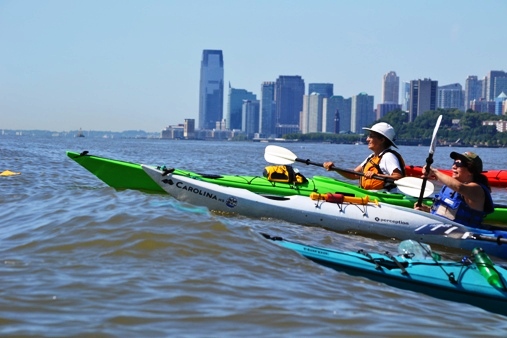 I wonder what Henry Hudson would have thought as he ventured up his namesake on June 24th. I think he would be astounded to all the concrete and steel buildings for sure, but the number of kayaks, sailboats, power boats, water taxis, sightseeing boats, tugboats, barges, cruise ships and naval ships that venture on the river would test even one of the most famous ship captains around.

The thrill and excitement of the Hudson, seeing the New York Harbor from a new perspective, paddling from a new launch location—I don’t know everyone’s reason for coming on this trip, but we had 16 paddlers (Gail N., Gail S., Monica, Lori, Bob L, Jerri, Bob C., Neal, Herta, Ted, Ken, Janet, Cora, Chris, George, and me).

It was a beautiful day and we managed to launch our kayaks from a sandy beach in this fairly new cove; a pier park was on our left and a commercial pier was on the right. It was easy for us to unload our boats at the curb of the boathouse. The beach was a few feet away. The trouble began when you had to park your vehicles. It’s clearly not an easy task as a few of us discovered. Hoboken police lurk everywhere.

With our full contingent of paddlers we paddled out of the cozy cove and into the unknown. Northbound on the Jersey side we ventured past apartment buildings, piers of a bygone day, gulls and cormorants perching on top, and more water taxis than you could imagine on a Sunday morning. The taxis take off and turn quickly and we soon found out that we had to be constantly aware of their wake. A very large group of paddlers from the 59th Street Boathouse in NY was making its way past us. We paddled across the Hudson to where they had come from. We took a short break then headed south past several cruise ships, tugboats, and the Intrepid with all its airplanes and under wraps, the shuttle Columbia. Signs warning us stay 100 yards away from the piers were announced in large signs repeatedly. Not wanting to be “marked” again by the water patrol, we easily stayed clear of the piers.

At about the Chelsea Piers area we made our way back over to Hoboken, still dodging water taxis and Circle Line ships. What we found was chaos. The launch area was taken over by members of the Hoboken Cove Boathouse. They were offering free kayaking demos and there were literally dozens and dozens of people trying out stand up paddleboards and kayaks. It was almost impossible to land. But we managed, one by one, to slide our way into a sliver of open beach.

It was a beautiful, sunny, Sunday morning hampered only by a few incidents (“lost keys”, police violations, and not enough parking). Aside from that, I think everyone who kayaked was left with good memories of a paddle of the Hudson from a different perspective. 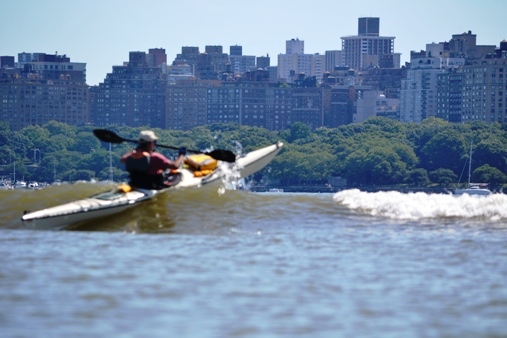