Twenty hardy paddlers gathered at the Great Falls National Park to view the Falls and paddle a more tranquil part of the river. Separated by parking lots—I must admit the one most gathered at was more organized and paved, but I was on high ground and could see the Falls from a better perspective. I waved them over and a caravan soon processed along the bridge and around to where I was located.

Even for a veteran of seeing the Falls multiple times, it never ceases to impress. There were many in our group who had never been to the Falls and now that it is a National Park, we should all be proud of its long history.

From there we caravanned to Pennington Park in Paterson, only to discover that there was a great number of citizens using the park’s ball fields and not a parking spot was to be had…well, except for the Kahn family who launched from that side of the river. After a good bit of turning around we went for Plan B, which was to venture over to West Side Park on the Totowa side of the Passaic River.

Without much trouble we all arrived at our new location. A police car was parked right where we needed to be. I’m sure he felt quite stunned seeing a group of vehicles bearing boats bear down on him. “I don’t see why you can’t park here,” he remarked. Officer Justin got out of his police car with his rescue dog and proceeded to marvel at our group.

Several sets of stairs are built into a wall at the edge of West Side Park (I’ll have to do some research to see when this park and Pennington were built…to me they have a similarity to a mini-Central Park). Each paddler, one by one, proceeded to launch their boat from the steps, a different experience for many of us.

The river was very calm and we proceeded south, going with the flow, towards the dam which is about 200 feet from the falls. But unlike a previous trip I had taken, we could not saddle up to the dam—the water was flowing over it, making it a bit unnerving. We doubled back under the McBride Ave Bridge (actually Wayne Ave.) and headed upriver, passing again under a pedestrian bridge dating back decades. It was a very pleasant paddle with enough depth and sometimes good clarity to see the bottom. We managed to get to the next boat launch although we could not get out. The plant material had grown too much. Alas, we turned back at this point to the put-in. A short, but nice half-day paddle, passing near Route 80 and getting close to Route 46.

There was a pavilion at the put-in and some of us had brought lunch or a snack. It was time for a bit of conversation. 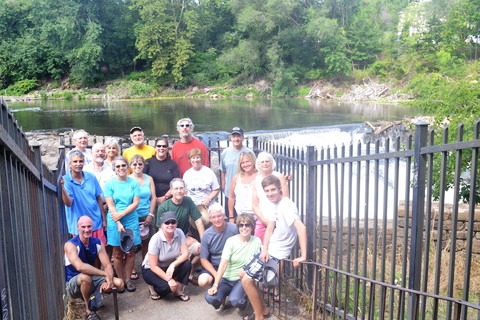