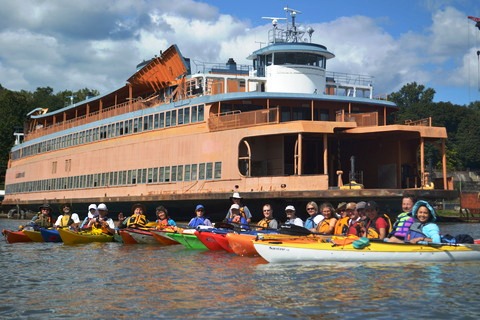 These days I don’t know what’s better—a good paddle on a beautiful day or Manfred’s coffee and cake at the end of the journey.

I guess you could say for some of us the trip began at the Sheraton Crossroads in Mahwah where we met to caravan up to the launch site. George M, trip leader in training, advised the group of our three options for the best way to get to Plum Point. I was glad to let him lead the way…it only took 35 minutes to get there after a short excursion into the Woodbury Commons parking lot—a bit too early for shopping, however.

According to the Hudson River Voyager, this park is a hidden gem. A year or two ago, I assisted in an Eastern Mt. Sports Demo Day (with an assortment of other outfitters) at this location. Besides a sweeping beach, it offered direct access across the Hudson to Bannerman’s Island Arsenal—a fabulous ruin now operated by the Bannerman’s Island Trust through the Department of Conservation in New York.

The actual name of this location is Kowawese Unique Area (also known as Sloop Hill or Plum Point). It is a 102-acre park site owned by New York State and managed by the Orange County Department of Parks. It is an idyllic setting with picnic tables, hiking, plenty of shade and benches to look and admire the great views of the Hudson. There is a divided section just for local residents and one for the general public.

We were a very large group (Ted, George H, Heerta, Christine and George M, Sumonnat, Manfred, Neal, Chuch, Monica, Ken B, Ken K, Lori, Herb, Lorry, Mark G, Mikhael Mark D and me), but everyone was experienced for this section of the Hudson…so different from the Hudson Harbour. We were in the water by 9 a.m. and proceeded across the river to Bannerman’s Island. While I tried to get our group a tour, there was not enough notice and the best we could do was get a five-minute talk from two ladies who were at the island’s dock. They were informative...and it was a lot better than the possibility of getting slapped with a major fine if we were discovered on the island without authorization.

We paddled around the island eyeing the incredible ruins still visible from the water.
If you have the time, Google Bannerman’s Island for some historic information.

Paddling north on the east side of the Hudson, we focused our efforts on Denning Point, about two miles north of Pollepel Island (Bannerman’s Island). Along the way we saw little tykes toys, a picnic table, and lots of other interesting items left by storms or the ebb and flow of the changing tides. Denning Point is a peninsula that juts out and is a haven for hikers and some geocaching. George M. scouted the shoreline and found just the right spot for all of us to beach our boats, take a good rest and have some lunch or snack. There were lots of driftwood logs to sit on and enjoy another part of our trip. We were shocked to see a young man and his daughter paddle nearby—him without a life vest, although his young daughter did. We all shook our heads in amazement.

Three members of our group ventured out to do some geocaching while we paddled north a bit. Not finding another beach we waited for them before we crossed the river. I had our sights on a ferry boat on the west side of the Hudson which was our next destination. Who knew we would find a damaged Staten Island Ferry in Newburgh! After circumnavigating the ferry, we rafted up to take a group picture.

The trip back was a little arduous and the scenery a bit industrial (some kind of fuel tank farm), but the reward was Manfred’s coffee, cake and other refreshments. Yummy!

We were back by 1 p.m. It was just another fabulous day on the water.