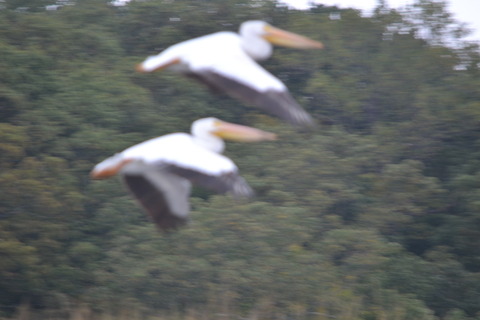 For the better part of the week weathermen were predicting rain...at least a 50% chance. After having postponed this trip for a week, I really didn’t want to cancel it. The bottom line was I didn’t want my scorecard (seven trips this year) to be challenged. So I called one of our paddlers. “Andy,” I said, “the forecast is rain. What do you think...go or no go tomorrow.” Andy replied with an air of confidence after doing some immediate search on his electronic equipment. “It’s not supposed to rain till 1 p.m.” I felt much better. That was the perfect response! We were due back to the launch around that time so I sent an email to all signed-up paddlers the trip was on.

The sky was bright and sunny when we met at the Palisades Center Mall, but we could see a dark bank of clouds in the distance. By the time we arrived at the launch the sky was changing and not for the better….but we would not be deterred.

Andy, Sumonnat, Manfred, Bruce, Stephan and I all gathered at 9 a.m. at Island Harbor Park in Mamaroneck. This lovely park is at the end of Mamaroneck Ave. and is just a terrific spot to launch from—parking and restrooms conveniently nearby. It’s right next to the Mamaroneck yacht basin and since Labor Day had past, there was no entrance fee charged.

It was a quiet day at the yacht basin (don’t most normal people sleep in on Sundays?) and we pleasantly made our way out of the harbour and into the Long Island Sound. It was low tide so much of the shoreline was exposed and rock islands as well.

The homes along the coast are, as one can imagine, quite beautiful, quite large and quite diverse in their architecture….colonial, contemporary, and everything in between.

The wildlife was equally diverse with the typical sea gulls, cormorants, great blue herons, egrets, swans, and osprey. But what was not typical was seeing two exquisite pelicans! What a delightful surprise! Who would have thought we’d see pelicans this far north?

Part of the area we paddled was up a river, past Marshlands Conservancy property and the Rye Golf Club (can you believe, as we were paddling, we were told to be quiet?…someone was putting!). We were approaching our mid point in the trip and landed at the Rye boat basin where a small park with picnic tables permitted us to lunch with style...and access to a boathouse with clean restrooms.

Finishing our food, we felt the first drop of rain. Perfect timing…it was time to leave anyway. Most of us had brought rain gear, so we donned it and paddled back up river. It was here we saw the pelicans….American Pelicans, and so unusual to be seen so far north. We think of pelicans as a southern coastal bird.

It was a gentle rain so we decided to go around Hen Island with its cottages already closed up for the season. The water was calm (and very warm) which made the trip back pleasant even though it was raining steadily.

Loaded and ready to leave, there was one more important detail to take care of—some time for a bit of added socializing—Mandfred’s coffee and rum cake. We found a small gazebo in the park. It was the perfect setting. Manfred—you can come on my trips anytime! We had a good time. Too bad the season is fading fast. 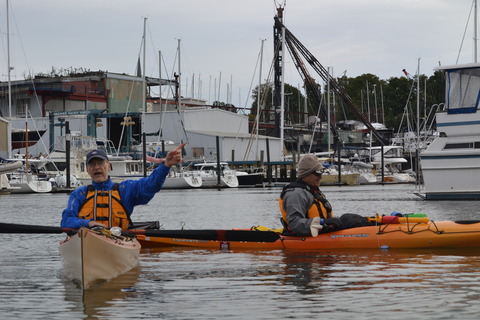 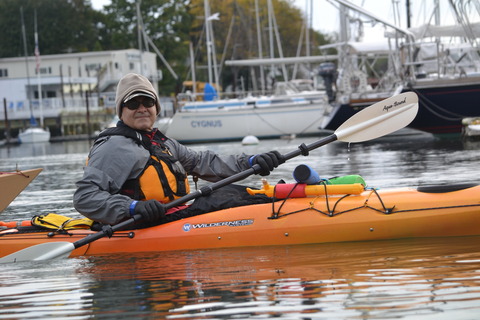