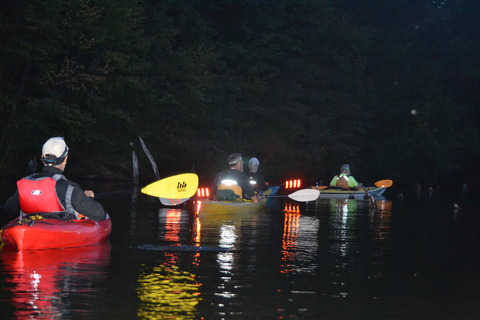 The paddle was only a few days before the true start of the Fall season, but the full moon was bright in the sky...in fact it was called the Harvest Moon!

A song came to mind. Most of us can remember the early 1900s tune “Shine On, Harvest Moon”. “The song was debuted by Nora Bayrs and Jack Norworth in the Ziegfeld Follies of 1908 to great acclaim. It became a pop standard, and continues to be performed and recorded even in the 21st century.”

For those of you who don’t know the words, here they are:

Couple sitting underneath a willow tree,
For love they did pine.
Little maid was kinda ‘fraid of darkness
So she said, “I guess I’ll go.”
Boy began to sigh, looked up at the sky,
And told the moon his little tale of woe.

The water was calm and barely a breeze which made paddling quite delightful. We got to Monksville early enough to enjoy some daylight paddling. A trip across the water led us to a portion of dead trees and stumps....some of them had a number of cormorants sitting at the dead tree tops.

We spent a lot of time just hanging out on the water, chit-chatting with our fellow paddlers, enjoying a few snacks, and just watching the beautiful harvest moon show its face as it made its way above the dam and above the tree line.

A number of us went for pizza at a local restaurant. It was nice...we could bring in our own beer!