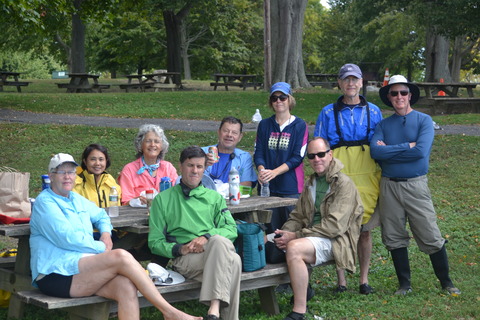 Posted as an exploratory trip, the kayak trip our of the Southport launch held up to its billing.

Back in June, Janet and I flipped through Day Paddling Long Island Sound searching for a new launch site. We read up on the Souhtport launch and it seemed perfect! But when we got there a security guard informed us that it was restricted to residents only from Memorial Day to Labor Day. Undeterred, we learned of another site a few miles away and had a lovely paddle in the Ash Creek location. We’d paddle the Southport launch another day.

At the launch and right from the start, I was informed by one of our members that the posted sign now reflected an end date of November 15th. Somehow the hand-written tape mysteriously disappeared and there was no one in the guard house to turn us away.

Southport is a quaint but spectacularly affluent small town with a yacht club as old as the native Indians which, I assume, inhabited the area hundreds of years ago. It was named the Pequot Yacht Club with Pequot Avenue nearby. That road blended with Harbor Road, our ultimate destination.

We decided to make Sherwood Island State Park our destination. ..a good two miles west of our launch.

After a short paddle out of the launch area, we kayaked along the coastline taking in the mostly monstrous mansions that lined the mainland. We paddled from one point to the next eliminating curvaceous part and the natural curve of land. As we paddled, we saw, in the distance, fluttering arm movements. Carolyn and another paddler approached the swimmer at a safe distance. We all watched, enthralled by the swimmer’s relentless
pace and undaunted by our presence.

We continued on toward our destination and came upon the eastern inlet stream of Sherwood Island. After a very short paddle upstream, the current and flow seemed to be not working in our favor and we turned around and went back into open water. Perhaps the other side of Sherwood would be better.

After a little deliberation, we opted for a sandy beach and lunch stop....well, okay, a bathroom break as well. What we discovered was a delightful picnic area overlooking the Sound. A relaxing respite was had by all.

Back in the water, with George and Christine in the lead, we headed for the western opening. The tide was still going out. George got out of his tandem. The water was so shallow It almost appeared as if he was “walking on water”. It was clear that circumnavigating Sherwood Island was definitely a paddle for another day...one that rendered the waterway in high tide mode.

It was not an easy paddle back. The wind was against us and the constant swells made the return trip more difficult. We all persevered although at different paces.

At the boat launch, I went to my vehicle and was approached by a uniformed guard. It was a friendly conversation. He informed me that the site was only for residents only until November 15th. Oh, dear! There was no violation issued, thank goodness and we all managed to escape being issued summonses. It also helped to discover later on that an elderly couple who sat at the large picnic table where Manfred had put his goodies were the parents of the guard. You never know where a conversation goes!

We discovered that there was a kayak launch on Sherwood Island. Next year George promised to lead the trip around Sherwood Island....and be our chef...great picnic area too!