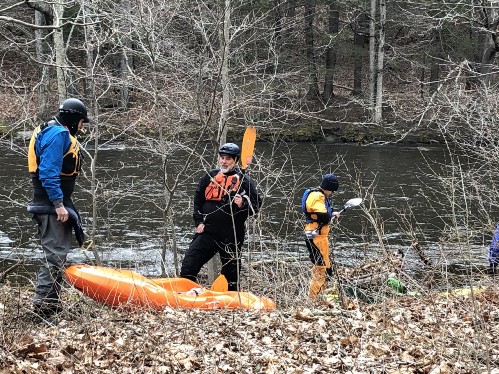 In my 48th season of paddling rivers , I experienced my first hailstorm on the water. Our annual April excursion on the Shepaug in Litchfield County, CT brought a few surprises:

First - high water. The Shepaug is a very rocky river and often gives us a very scratchy run, even in early spring. Last year, for example, the water coming off the reservoir at Peter's Dam registered 2.58 on the gauge and it was an extremely bumpy ride. Usually, a tolerable run is between 2.75 and 2.94 at that gauge. This time, we found it at 3.67 (353cfs). It had just slipped below 400cfs overnight so we opted to do the lower portion from Bee Brook to Hodge Park in Roxbury.

Second - odd weather. It seemed like it would be a nice day, a bit on the cool side. As we were about to get underway, a light rain started to fall. It didn't last though and we proceeded under mostly gray skies into the fast-running section at the start. There was some nice maneuvering through bigger than expected wave trains but everyone got down to Washington Depot without incident. After the town, on a sweeping turn, three paddlers ended up in the river after dropping over a hidden ledge. Fine self-rescue techniques were observed and we were soon underway again. Then it started to rain, lightly at first but driven by a cold wind announced by a thunder clap it changed to hail...not big stones but enough that when I pulled into the lunch stop at the Scout camp, there was ice on my air bags! A little less time than usual was spent at lunch but the precipitation did stop and there was some blue sky. The remainder of the day was uneventful - some wind, some sun and some clouds but great water, fast flowing with nice waves.

No great surprises on the wildlife front but there were many Common Mergansers, both groups of females and many mated pairs. A few Red Tail Hawks and Belted Kingfishers were spotted as well. Another great spring run on the mighty Shepaug. Thanks to Mark Grossmann, Maryanne Phelan (picture credits), Paul Danielewicz, Phillip and Peter Molzer and the three Conn/Mass kayakers who tagged along with us: Brian R., Bill and Mario. 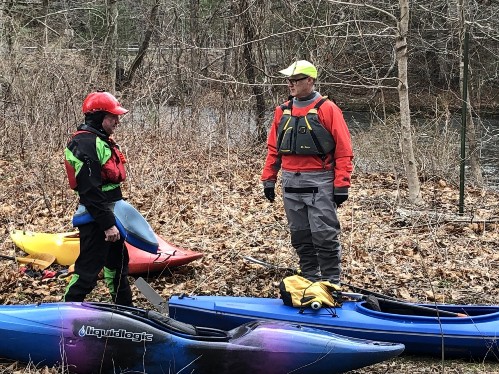 WHERE WE'VE BEEN THE PAST YEAR